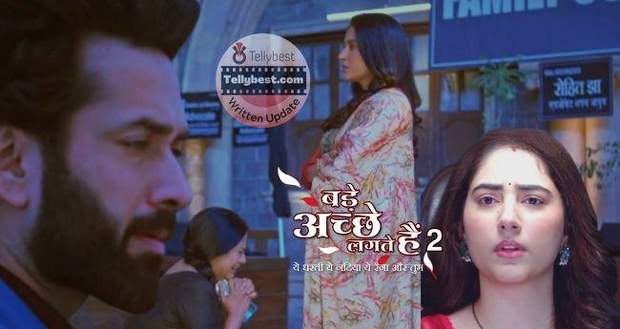 Since Swati did not hold her end of the bargain, Nandini will also not keep her promise and expose Ram’s past by going to the police station.

Priya finally understands that Ram is taking her to the family court where they got wet in the rain while fighting together in the past.

Back at the court, Nandini asks Swati how dare she take Nandini’s right of doing the "Gatbandhan".

At the same moment, Ram and Priya reach there and find Swati on Nandini's knees in front of the court.

Nandini changes the subject and asks Swati to get up and then asks Swati why is she forcing Nandini to give her a part of Ram’s property which makes Priya think that Swati is merely agreeing with Nandini and it looks like an act.

Priya asks why Swati decided to meet Nandini and not Ram if all she wanted was a share in the property.

Nandini thinks to herself that Priya is very smart and says that she stopped Swati from meeting with Ram as she knew that it might spoil RaYa's wedding day.

Before Ram can say anything, he gets a call from Yash who tells him that Avni is missing.

Sid tells Ram that he saw Lakhan outside Avani’s room and when he tried to catch Lakhan, then Lakhan hit him hard in the face.

In reality, Sid asked Shubham to hit him in the face when they were in a car outside Yash's house to plot against Lakhan.

Ram yells at Lakhan and asks him where Avni is to which Lakhan replies that Avni is in his heart.

Lakhan asks Ram to ask Yash whether he wants a good husband for Avni or only Ram’s money.

He exposes Yash and tells Ram that when Yash found out that Ram is his brother, he asked Lakhan to beg for Ram’s forgiveness so that he gives a share of his property to him.

Lakhan says that Yash was dealing with her daughter in the name of marriage.

Lakhan further says that everything is happening because of Ram because he came into Lakhan's love life without knowing that for Avni’s sake, Lakhan can kill or get killed.

Priya goes to Lakhan and requests him to tell her the whereabouts of Avani as she cares about him and his feelings.

Lakhan trips because he is too drunk and when Priya tries to hold him, he jerks her off which infuriates Ram.

Ram goes to Lakhan and punches him hard on the face and takes him to the police station himself by dragging him by his collar.

The next day, everyone is assembled in the Cafe, worrying about Avni when Pihu enters with Meera Ma and blames Ram and Priya for eating all the kebabs.

Pihu then tells Priya that she has to make cupcakes for her kitchen ritual while Aditya gets a message saying that Lakhan has gained his senses and he should report to the police station immediately.

Meanwhile, Avni wakes up in a room and finds Lakhan’s letter next to her saying that he will do anything to win her.