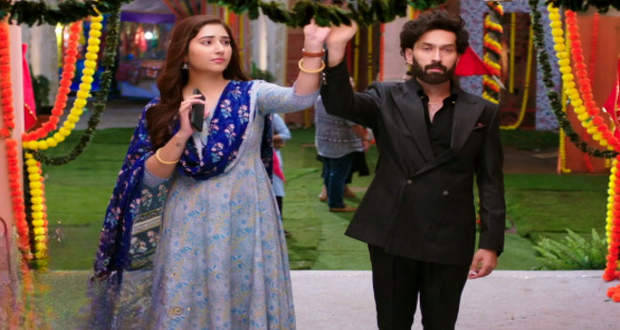 Today's Bade Ache Lagte Hain 2 23rd June 2022 episode starts with Ram and Priya stuck in the elevator together with Aditya and others trying to get them out.

The guard forwards his hand toward Ram and Priya and asks any one of them to get out first.

At Priya’s request and seeing Nandini’s health, Ram decides to get out of the elevator first.

Nandini and Vedika take Ram away from Priya as soon as he gets out and try to prevent him from looking after Priya.

Priya tries to get out while the lift fumbles down a bit making her scream with fear.

As soon as Ram hears Priya’s scream, he pushes Nandini and Vedika aside and rushes back to the lift to help out Priya.

Ram extends his hand toward Priya and asks her to hold on to him as he will not let go of her at any cost.

After a bit of hesitation, Priya gives away her hand to Ram and succeeds in getting out of the elevator, landing straight on him.

The minister arrives in the meantime and questions the reason for the crowd gathering outside the lift.

Nandini digs in and introduces Ram and herself while announcing that Vedika is Ram Kapoor’s fiancé.

Priya hears that from a distance and walks away while clenching her fists.

Later, after discussing the proposal with the minister, Ram decides to talk with Vedika and Nandini regarding the announcement.

Nandini tells Ram to get married to Nandini for his family’s sake but Ram refuses to do so and leaves.

Meanwhile, Pihu asks Priya about her prince charming and wonders why he does not come to meet them.

Priya somehow explains things to Pihu and makes her sleep while her thoughts linger on the announcement of Ram’s wedding.

With a heavy heart, Priya decides that she will not be sad as Ram is finally happy in his life.

At the same time, Ram dwindles on Nandini’s suggestion about his marriage with Vedika as it will make Nandini happy.

© Copyright tellybest.com, 2020, 2021. All Rights Reserved. Unauthorized use and/or duplication of any material from tellybest.com without written permission is strictly prohibited.
Cached Saved on: Thursday 23rd of June 2022 11:30:26 PMCached Disp on: Saturday 2nd of July 2022 07:04:58 PM