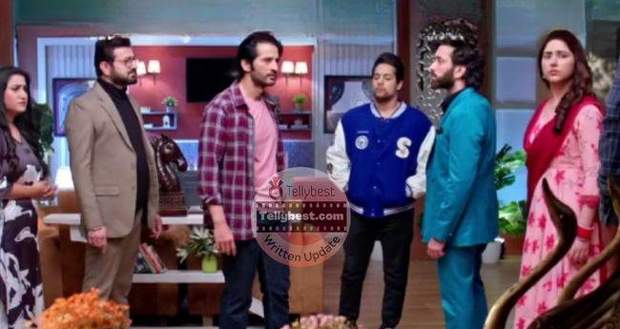 Ram says he will be happy from now on and then goes to Priya to help her because he is a feminist.

Pihu agrees to Ram and says that he really is “Feminine”. Pihu's mispronunciation makes everyone laugh.

After a while, Ram teaches Pihu that true strength comes from the heart to which Priya says that nowadays Ram has become very serious.

Pihu says that she has a remedy for that and starts tickling Ram while Priya thinks that her heart is not ready to accept that Lakhan is behind Avni’s kidnapping.

Meanwhile, Avni thinks that Lakhan is behind her kidnapping but it is actually Sid and Shubham who has kidnapped her and framed Lakhan.

At the police station, Aditya asks Lakhan to tell him about Avni’s whereabouts if he knows where she is.

Lakhan says that Aditya has made him guilty and innocent at the same time and will never understand what Lakhan actually wants.

Priya enters and says that she knows what Lakhan wants and hands him the property papers.

Lakhan looks at Priya in astonishment and then throws back the property papers and yells that the property can't wipe the stains which people have put on his character.

Priya says she knows that Lakhan is not after this and was just testing him but she needs his help to find out the real culprit because Avni is missing for real.

Lakhan says that he will do anything for Avni’s sake but he needs to get out of jail for that.

Lakhan tells Priya that when Yash found out the truth about Lakhan and Ram being brothers then he immediately changed his stance and promised Lakhan that he will marry Avni to him but on the condition that he begs Ram for forgiveness.

Lakhan then says that neither he nor his mother ever begged for anything but just for Avni’s sake he still called Ram last night but Ram insulted him.

Lakhan says that after that he drank a lot of alcohol and does not remember anything but he knows for sure that he has not harmed Avni.

After a while, Aditya informs Priya that their appeal for Lakhan’s bail got denied.

Lakhan says that last night he went to Avni’s room through her window just to talk to her because Yash forbade them to meet.

Meanwhile, Sid and Shubham are manipulating Ram against Lakhan when Yash brings a briefcase filled with money which he found among Lakhan’s stuff thinking that Lakhan must have stolen this money and has used it to kidnap Avni.

Sid and Shubham say that there is only one hotel that accepts cash and Avni might be there.

After a while, Priya also reaches the same hotel where Ram, Shubham, Sid, and Yash were present and finds the CCTV footage in which a man wearing Lakhan’s clothes holding unconscious Avni.

Priya feels that maybe she is wrong to think that Lakhan is innocent.

Ram and the others reach the room in which Avni was supposed to be but the room turns out to be empty.

© Copyright tellybest.com, 2022, 2023. All Rights Reserved. Unauthorized use and/or duplication of any material from tellybest.com without written permission is strictly prohibited.
Cached Saved on: Wednesday 25th of January 2023 08:47:30 AMCached Disp on: Wednesday 1st of February 2023 09:52:11 PM