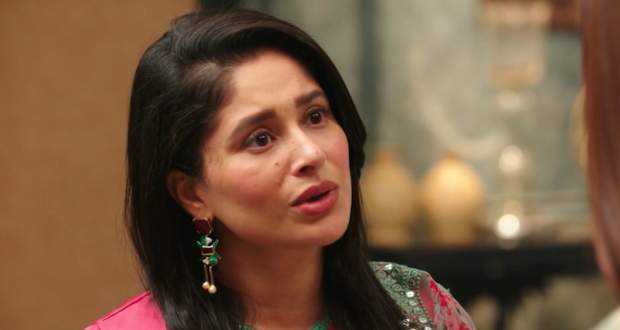 Today's Bade Ache Lagte Hain 2 24th May 2022 episode starts with Ram and Krish seeing that Shashi did not arrive to meet Varun.

Seeing this, Ram loses his calm and grabs Varun's collar.

Further, Ram decides to call the cops but at the same time, Ishaan arrives there.

Ram realizes that coward Varun is using his child to get out of this situation.

After Varun leaves with Ishaan, Krish tries to tell Ram that he has synced Varun's mobile but Ram walks away.

Krish stops Ram but he chides Krish for planning and plotting behind his back with his wife, Priya.

Hearing this, Krish tries to explain that he likes Priya but only as a friend.

Ram says that he is thinking about Varun but Krish is clearly thinking only about Priya.

In the meantime, Shivina unknowingly tells Nandini about Priya and Meera's talk in which she mentioned Varun stealing some papers from Ram's suite for Shashi.

Nandini decides to use this as a distraction while they steal Ram's original Will and get it changed by their bribed lawyer.

Meanwhile, Ram drives home and is furious because Priya repeated her mistake of keeping him in dark.

Suddenly, Ram recalls that Priya wanted to tell him something important last night but he didn't listen to her.

Later, in the evening, everyone is preparing for the pooja on the occasion of Virendra's birthday.

When Priya walks downstairs, Ram tries to talk to Priya.

Meanwhile, Mamiji is stealing Ram's Will from Ram's room.

At the same time, Shubham demands his right for questioning Priya.

Shubham states that Priya knew that Varun was involved with Shashi but she hid this truth from everyone.

With a smirk, Nandini winds this situation with her emotional drama.

Priya tries to explain that she tried to tell Ram but situations restricted her from informing Ram.

Suddenly, Mamaji asks Priya what was her excuse for not speaking the truth since morning.

Hearing this, Priya says that she is not making excuses.

Ram says that the reason can be that Varun is Sara's husband and Ishaan's father.

When Priya states that she does not fail to punish the culprit, Ram asks her why was she not present while her plan to trap Shashi and Varun was getting executed.

Further, Ram says that he spotted Krish and Varun on his way after which he found out about the plan.

However, Shashi did not arrive and Varun escaped using Ishaan as a shield.

To heat up the problems, Nandini asks Priya to reveal the truth and questions whether she was trying to save Varun.