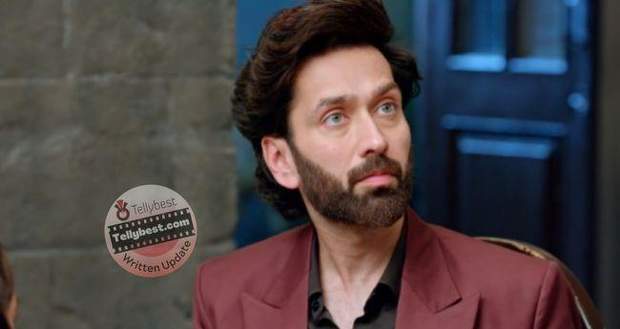 Pihu asks Priya not to call Nandini or Vedika because they will take him away from them.

Anxiously, Priya calls Nandini’s number and Nandini picks it up while being in the car to Shimla with Vedika.

After Priya says hello, the driver steps on the brakes swiftly which knocks Nandini’s phone down.

Little Pihu prays to the Moon, asking her Chanda Mama to heal Ram as she sheds a tear.

Miraculously, Ram begins to wake up while Priya quickly cuts the call & Nandini tells Vedika that some woman had called her.

Priya introduces herself as Lovely Singh to Ram who is confused as to how he ended up at Lovely’s house.

Ram tells Lovely he will leave while she sternly tells him to stay the night & focus on his health.

She informs Ram that she will call Aditya if he can pick Ram up.

Meanwhile, Pihu engages Ram in her cute talks, telling him that she has an acting competition to win at school.

Ram pretends to be the best dramatist in Bandra and pulls Pihu’s hair while both of them play with each other.

Priya smiles at the sight of them enjoying & proceeds to inform Ram that Aditya did not pick up.

Stating that he is no longer allowed to attend 2 AM meetings, Priya gets firm while Pihu whispers in Ram’s ear to listen to her strict mother.

Meanwhile, Nandini tells Vedika that she can only guide her toward Ram just like Nandini made Virendra, Ram’s father, fall in love with her.

She calls Shubham and asks him to find out the person who called her minutes ago.

At Sood House, Priya wears her marriage bangles and looks at an asleep Ram & Pihu dotingly.

She thanks God for letting her stay near Ram as his PA and wishes to enact his wife’s role too.

Just then, Priya gets a call back from Nandini who tries to provoke her.

However, Priya stays calm while Nandini thinks she has won.

The next day, Ram wakes up and finds Pihu cuddled to him.

He softly entangles her limbs from himself and looks at her lovingly.

Meanwhile, Priya is on a call with Sarah and says she is not a PA but a housekeeper for making breakfast, cleaning clothes, etc.

Ram hears this and thinks Lovely is angry at him while Priya curses at herself for making a terrible joke at the wrong time.

When Ram opens the door, he sees Krish & gets awkward.

Meanwhile, Aditya freaks out when he sees many missed calls from Priya.

Ram feels bad that Lovely did not stop him as he leaves while Krish consoles Priya not to blame herself for Ram’s abrupt change in health.

However, Ram comes back once again & sees Krish's palm over Priya’s hand.

© Copyright tellybest.com, 2022, 2023. All Rights Reserved. Unauthorized use and/or duplication of any material from tellybest.com without written permission is strictly prohibited.
Cached Saved on: Thursday 24th of November 2022 11:36:20 PMCached Disp on: Friday 9th of December 2022 04:47:43 AM