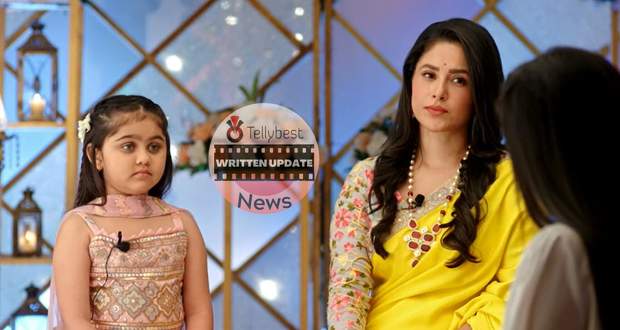 Today's Bade Ache Lagte Hain 2 25th August 2022 episode starts with Ram caressing Priya’s face as they fall over each other while fighting.

Ram asks Priya not to say anything for some time as he wants to convey the feelings that he has found the courage to express.

As Priya waits silently for Ram to say his words, Ram tells Priya that he wants to give a second chance to their relationship.

Ram says that despite Pihu being Krish’s child, he feels attached to her and loves her immensely.

Requesting Priya to think about the suggestion, Ram declares that he wants to be the dad of Pihu and does not care whose child she is.

Ram explains how earlier he used to hate Pihu as she reminded him of Priya’s betrayal but now, he is in love with her and refuses to let her go.

Priya gets shocked to hear Ram’s request and feels guilty about hiding everything from him when he is such a good father.

Giving Priya the time till the Janmashtami celebration to think, Ram feels hopeful that Priya will decide to stay with him as he needs her.

Meanwhile, Brinda desperately waits for the DNA reports while Aditya thinks that Brinda is going to die.

Ram comes there and gets concerned about Brinda after hearing from Aditya that Brinda is on the brink of death.

Ishaan confronts Krish regarding his plan to propose to Priya and asks him not to do it.

However, as Ishaan tells everything to Krish, Vedika records it on her phone and takes it to Nandini.

Ram and Priya talk about their discussion with Brinda, Aditya, and Sarah separately and ask them to support them.

Janmashtami celebration starts with Ram thanking Pihu for telling good things about him.

Pihu tells Ram that Krish celebrates Janmashtami every year with them after he succeeds in finding them.

Ram understands that Krish does not live with Priya and Pihu and relaxes a bit.

© Copyright tellybest.com, 2020, 2021. All Rights Reserved. Unauthorized use and/or duplication of any material from tellybest.com without written permission is strictly prohibited.
Cached Saved on: Friday 30th of September 2022 06:24:41 PMCached Disp on: Saturday 1st of October 2022 12:06:21 AM