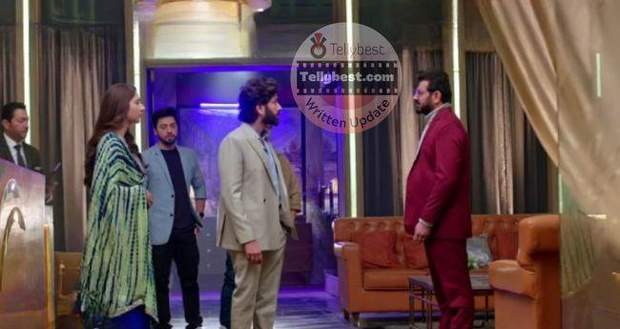 Today's Bade Ache Lagte Hain 2 25th January 2023 episode starts with Priya finding Avni’s earrings on the bed of the hotel room which worries Yash as he fears that Lakhan might have done something wrong with her.

Meanwhile, the media people spots Pihu and starts bombarding her with insensitive questions which makes Pihu very scared and she runs towards Vikrant and Sara but eventually trips and hurts herself.

Sara yells at the media and blames them for not having any work ethics.

Priya and Ram immediately returns when they learn about what happened to Pihu.

Pihu hugs Priya and asks if Lakhan is a bad person who has kidnapped a girl as the media asked her.

Pihu says to Ram that she feels scared and wants to stay with her parents to which Priya says that she needs to answer Pihu’s question.

Vikrant says that the Media behaved as if they knew everything even though this news was kept so confidential.

Priya says that she will not take any names without any hard evidence but she knows that the same person is involved in kidnapping Avni and informing the press about the incident.

Shubham says that Priya should not doubt him or Sid but instead doubt Swati because she is capable of doing this and also has a motive.

Sid backs Shubham up and says that Swati is capable of doing anything.

Priya says that Swati will not benefit from doing these things and they should not blame anyone on the basis of past mistakes.

Pihu starts crying and says that she wanted to be in a happy family but everything is going sideways.

Vikrant asks Ram to stay back at the house while he and Aditya will go and find Aditya.

After a while, Ram and Priya try to cheer Pihu but she is scared for Avni.

Pihu asks Priya why people do bad things to which Priya says that sometimes people try to take shortcuts for reaching their destinations and while doing so they do not realize that they are taking the wrong path.

Meanwhile, Shubham angrily moves towards Swati in order to hit her but Vikrant reaches there at the exact moment and stops him.

Vikrant says that he had kept an eye on Swati from the very beginning and is sure that she is not behind it.

Yash joins his hands in front of Swati and begs her to help him because he knows she only loves Avni.

Yash shows Swati the CCTV footage of Avni and a man dressed like Lakhan.

After a while, Swati goes to the police station and confronts him about Avni to which Lakhan says that he can't believe that Swati is not trusting him.

Swati says that she asked him this because of Pihu as she is a little girl and is being forcefully dragged into this family drama.

Aditya and Priya overhears this conversation after which Priya says that this proves that Swati is innocent and so is Lakhan and they both are getting framed.

Back at the Kapoor Mansion, Nandini is scolding Shubham for kidnapping Avni as it might blow their covers.

Nandini says that from now onwards he will do everything she tells him to starting from passing the blame of Avni's kidnapping completely on Sid.

© Copyright tellybest.com, 2022, 2023. All Rights Reserved. Unauthorized use and/or duplication of any material from tellybest.com without written permission is strictly prohibited.
Cached Saved on: Wednesday 25th of January 2023 11:56:33 PMCached Disp on: Wednesday 1st of February 2023 06:46:11 PM