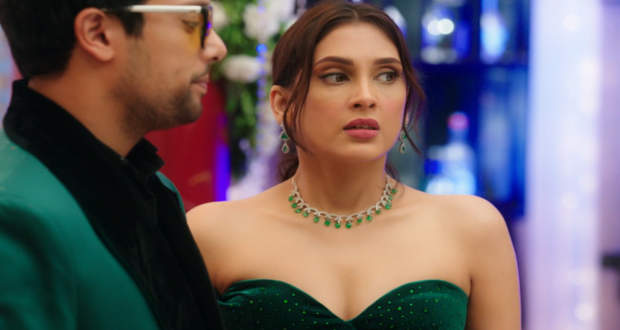 Ram starts to enact but no one understands anything except Pihu who quickly catches on to Ram’s signals.

Everyone bursts out in laughter when Ram asks a man to help him as he has to enact the word “Dhoti” and the man was wearing one.

Aditya and others start the countdown but Pihu guesses the movie name before they reach zero and win the game.

On winning the game, Ram and Pihu hug each other with joy making everyone feel endeared.

Meanwhile, Meera comes to the Kapoor mansion with Priya in the wheelchair and gets greeted by Nandini.

Nandini acts like she is concerned for Priya’s condition and says that she knows that she acted out the whole thing so that Pihu comes closer to Ram.

Hearing that, Priya tries to defend herself against Nandini but she does not pay heed to any other things.

Elsewhere, Ram hears Pihu telling Sandy about her adventure with Priya in a truck and wonders why Krish does not support them.

Suddenly, a reporter comes there and asks Ram what he is doing there with his daughter and why Priya is not with them.

The reporter accuses Ram of trying to separate Pihu from her mother regarding Pihu's custody.

Hearing that, Ram gets furious and asks the reporter to keep themselves limited to him.

Ram warns them that if he sees anything weird written about Priya or Pihu, then he will sue them and their publishing company.

Back at the mansion, Priya promises that she will never tell the truth about Pihu’s father to Ram so she does not need to threaten her like that.

Pihu sits at the café with a lot of cakes and drinks when Ram joins in and talks about his habit of gobbling sweet things when he has to think of an idea.

Getting immersed in the discussion, Ram and Pihu talk to each other normally with Ram saying sorry to her for fighting over a cupcake in the past.

Ram offers a cupcake to Pihu which she eats delightfully and tells Ram that he is the only one who does not love Priya.