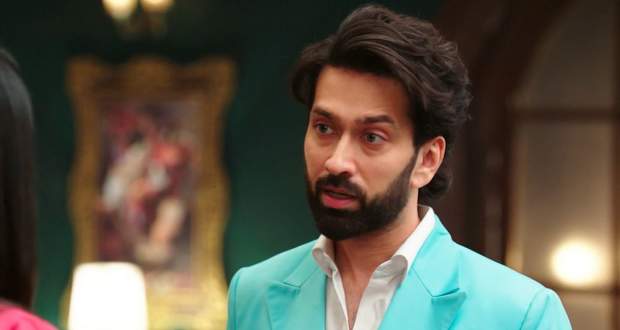 However, Ram does not burst at Priya but instead explains to her calmly that next time she will let Ram know every inch of detail.

The family sits at the puja with Shubham removing the cloth from Virender Singh’s picture.

Ram was talking to Priya when Priya’s eyes fall on Virender’s photo with him standing in front of his car.

As Priya sees the number plate, she gets shocked as it is the same one that she brought with her from the things Mahender Sood sent her mother.

Priya gets up and rushes to her room to get the number plate after Ram tells her that was the car in which his father died.

However, Sanjeev and Neetu stop Priya from leaving and reveal the number plate to everyone saying that she was on her way to hide it.

Flashback starts with Nandini receiving a message from Sanjeev who informs her that he has found the number plate of Virender’s car in Priya’s belongings.

Nandini gets shocked and asks him to bring it downstairs.

Coming back to the present, Nandini and Ram both question Priya about how she has the number plate that the police also failed to find out.

Priya reveals that she found it among the things that Mahender Sood sent Meera which makes the idea clear.

Nandini announces that Mahender Sood is involved in Virender’s murder and Priya is protecting him by hiding the truth.

Priya denies the allegation strongly with Ram defending her while telling everyone that it is not Priya’s fault.

However, Nandini plays an emotional drama and asks Ram to choose between her and Priya.

Priya tells everyone that she asked Meera about Varun and Mahender but she has told her that Varun is not a bad person.

Ram stops Priya from talking further and says that he will side with Nandini as he is her son.

Just then, Meera enters and questions everyone about Priya getting doubted without any reason.

Priya tells Ram that he has decided to leave her hand now but she wishes that the culprit gets punished for their deeds.