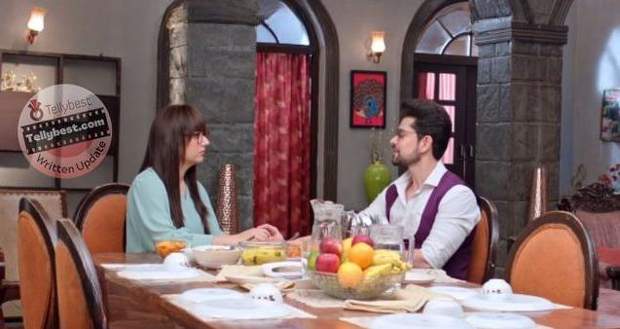 Today's Bade Ache Lagte Hain 2 25th November 2022 episode starts with Ram coming back inside Sood House to see who the man talking to Lovely is.

Ram says he just wants to take some breakfast away and Priya laughs after Ram goes while Krish states he came again because of him.

Outside, Ram munches on the croissant baked by Lovely and thinks who could that spectacled guy sitting with Lovely be?

Just then, Aditya & Vikrant bombard Ram, asking where he has been all night.

Sarah dramatically tells Vikrant she doesn’t like Lovely calling him at night to fool Ram and introduces herself as Vikrant’s wife.

She gets a call from Ram who asks her to come to the office since he has a meeting.

Lovely reminds him that it is Shubham who has to attend that meeting while Ram knows Shubham will wake up later.

At his office, Ram asks Vikrant about Lovely and who is Pihu’s Dad.

Vikrant tells Ram that Pihu’s father is caring and alive wherever he is and he will find out all the details Ram wants to know about him.

A second later, Ram gets Vedika’s call who says she is enjoying a lot in Shimla but is missing Ram.

Just then, Lovely enters Ram’s cabin with his files and Vedika grows suspicious as to who is with Ram currently.

Without giving any clue out, Ram refers to Lovely as Sweety and tells Vedika he has hired another PA to help him.

He cuts the call while Lovely reminds Ram that Shubham has a meeting scheduled at 4 PM and he should only attend it, not Ram.

Priya deliberately leaves her phone inside Ram’s cabin so Ram gets Pihu’s call.

Outside, Vikrant gives Priya a high five who is keen to show Shubham his place.

Pihu calls on Priya’s cell phone and Ram picks it up, hearing Pihu say that she has to practice for the competition at her school and is waiting for Ram to teach her.

However, Ram tells Pihu he has a meeting at that time while she sounds upset.

Ram tells Pihu he will try to come and ask Lovely to reschedule the meeting because he has some work.

He waltzes out of the office happily while Priya knows he has gone to meet Pihu.

Later, Priya calls on Shubham’s number and tells him that Ram is not available to attend his meeting and he is required at the office.

To aggravate Shubham a little more, Aditya & Vikrant make fun of Shubham saying he will now go and cry to Nandini.

At Sood House, Pihu tells Meera Ma that she wants to pick the best outfit as her recent best friend, Mr. Khadoos, is coming to visit her.

Ram hears this and smiles, saying he will like whatever Pihu wears.

Pihu asks him to choose one of the T-shirts he holds and hugs him when he chooses the pink one.

After Pihu goes to change, Meera apologizes to Ram that he had to come leaving work unattended but Ram says he likes to spend time with Pihu.

Suddenly, Meera gets reminded of her memory with Ram when they both ate pakoras on a rainy night.

© Copyright tellybest.com, 2022, 2023. All Rights Reserved. Unauthorized use and/or duplication of any material from tellybest.com without written permission is strictly prohibited.
Cached Saved on: Friday 25th of November 2022 11:56:02 PMCached Disp on: Monday 5th of December 2022 12:34:50 AM