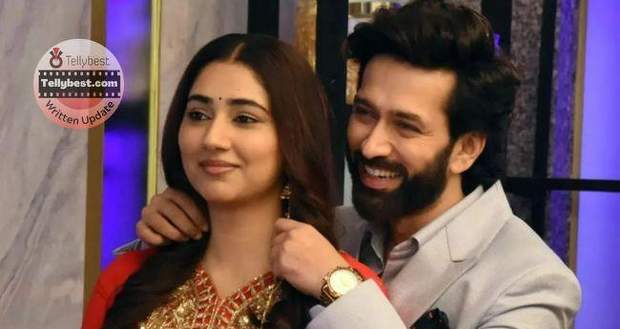 Today's Bade Ache Lagte Hain 2 26th December 2022 episode starts with Priya telling Ram that she wants their upcoming baby to be just like him.

Priya looks down at her belly and asks the baby to promise her that he will be like Ram.

Ram says that the baby's Mumma will have to make a promise first, asking Priya to let him and Pihu spoil their baby to the fullest.

The next day, Yash Khanna tells his wife, Veena, that Ram is going to marry his wife twice and Swati hears this and thanks God for listening to her prayer.

On the other hand, Ram descends for breakfast and sees Shubham already seated at the breakfast table but no Nandini.

He asks Shubham where is Mom and Shubham rudely says that how can she come downstairs after yesterday.

Ram scolds him for talking so boorishly about Nandini and asks Tarun to take breakfast for Nandini upstairs.

Meanwhile, Priya and Sara are grocery shopping together.

During their shopping, Priya says that she is worried about Ram as he has been hurt while Sara agrees, stating that if instead of Nandini, Ram's real mother was there, his life would have been more beautiful.

Sarah asks Priya to pay the bill for the vegetables and goes to the next stall.

However, Swati comes to buy vegetables at the same tall when Priya experiences a headache and loses her balance.

Swati holds her up, asking if she is okay when suddenly Ram and Sarah appear.

Swati goes in the opposite direction that the woman (Priya) has someone to look after her without realizing that it is Ram.

Ram asks Priya why couldn't she take one of his cars when Priya tells Ram that she is pregnant but not sick.

Sarah tells Ram that his jokes are boring while Ram calls Priya a brinjal since she is wearing a purple and ends up calling Sarah a pumpkin.

Sarah gets angry and runs behind Ram with vegetables in her hand but in the end, all of them laugh.

Later, in Ram's cabin, Sid and Shubham ask Ram to sign the presentation papers as they need to send them to Yash today.

Ram clearly tells Shubham that first he will peruse them and Shubham realizes that Ram will not trust anyone so easily.

However, Sid suggests Ram call Yash to his office.

At Sood House, Sarah complains about Ram and says he was trying to scare her with blue-green eyes like a Naagin.

Meera laughs when suddenly, Nandini appears and Meera without hesitatingly, asks her to go back.

Pihu and Vikrant are returning after shopping for RaYa's wedding when Sarah informs Vicky that Nandini has the guts to come back to their house.

Nandini tells Priya that she has already won. Priya replies back, saying instead Ram lost his mother.

However, Nandini says Ram still has the third mother and that is Meera and urges Priya not to be so innocent as she played a game.

Priya savagely tells Nandini that if protecting her family is a game, then she will play the same game all over again.

Nandini gets teary as she says Ram will listen to Priya only and asks Priya whether she will let her stay at Kapoor Mansion or not.

However, Pihu runs back and pushes Nandini out of the Sood House, screaming she is a bad Dadi who wants her parents to break up.

On the other hand, Ram thinks of booking an appointment with a gynaecologist for Priya's pregnancy but gets disturbed by Sid and Shubham, asking if the papers are signed.

Meanwhile, Nandini gets humiliated and leaves after which Priya scolds Pihu a lot, getting her into tears.

Pihu takes Meera's support, saying if Nandini comes into this house again, she will beat her up.

Priya then gets Ram's call but she dismisses him quickly, cutting the call.