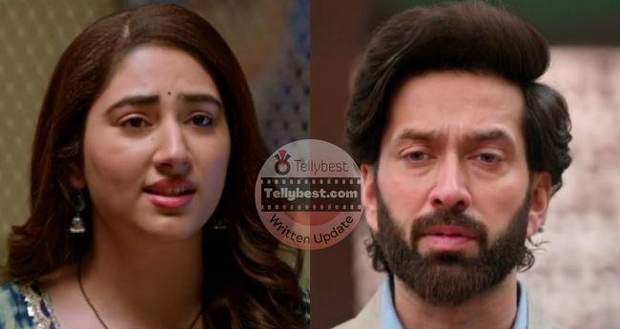 Today's Bade Ache Lagte Hain 2 26th January 2023 episode starts with Pihu entering and thinking that now she will play along with Ram but she gets sad when she finds out that Ram is planning to leave the house.

Ram pretends to call Priya and asks her to surprise Pihu with her favorite building blocks.

Meanwhile, Priya goes to Swati and asks her why she cares about Pihu if all she wanted from Ram was money.

Swati looks at Priya as if she has caught her off guard and then says that she wants to go home.

Priya tells Swati that Pihu’s birth took place in jail as she wanted to hide her pregnancy news from Ram because she was also manipulated by Nandini Kapoor.

Priya then says that she has been in Swati’s shoes and will understand and trust everything that Swati tells her.

Ram enters and asks Priya why is she so keen on helping Swati and then he turns to Swati and says that if only she gave a better upbringing to Lakhan then this day would not have come.

Priya asks Ram to stop as Swati is not involved in this incident and also that they don't have any proof against her.

Swati gets a call from Nandini who tells her that she has a way to save her son and then hangs up the phone.

Swati then goes to Ram and asks him to leave her alone as she is tired of his whines and also says that everything was going fine until Ram came into her life.

After Swati leaves, Priya thinks about how Swati changed her stance after the phone call after which Ram asks her to go and buy the toy blocks with him as he has promised Pihu.

Elsewhere, Vikrant follows Sid to a hotel and calls Aditya to inform him about it.

Vikrant tells Aditya that Priya’s doubt might actually be true and Sid might the one who has kidnapped Avni.

Sid receives a call from Shubham who asks him to return back to the Kapoor mansion as Nandini has an alternative plan.

Back at the Kapoor Mansion, Priya and Ram enter while bickering about who knows the Pavan (the staff) better.

Pihu asks Priya and Ram to do a competition for building a block house with Ram and Priya in one team and Pihu in another.

Pihu thinks to herself that now her parents will not fight but will instead have a lot of love between them.

Ram and Priya lovingly make the block house together after which Pihu comes and says that they have won the competition and from now onwards they will live together in the house.

Nandini enters the room which vanishes the color from Pihu's face and says that she is scared for Pihu and wants to protect her to which Ram replies that he can protect his family all by himself and does not need anyone’s help.

Meanwhile, Nandini calls someone on the phone who says that he can reopen Ram's case.

Swati begs Nandini to save her son Ram to which Nandini replies that if Swati convinces Lakhan to confess that he was the one behind Avni’s kidnapping then she would herself go to Yash and requests to bail Lakhan out and will also destroy the evidence against Ram.

© Copyright tellybest.com, 2022, 2023. All Rights Reserved. Unauthorized use and/or duplication of any material from tellybest.com without written permission is strictly prohibited.
Cached Saved on: Thursday 26th of January 2023 11:56:51 PMCached Disp on: Wednesday 1st of February 2023 10:12:30 PM