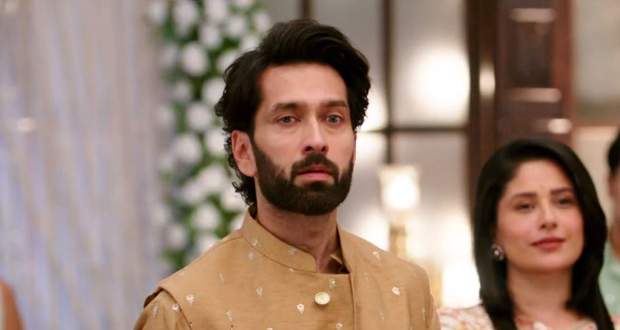 Today's Bade Ache Lagte Hain 2 26th May 2022 episode starts with Priya leaving Ram’s house with Meera while Ram stares in her direction without any words spoken.

After Priya leaves, Nandini, Sanjeev, Neetu, and Shubham discuss Ram and Priya’s separation and convince Shivina to leave for the Sood house.

Shubham asks Nandini to make the new draft of the Will as they can make Ram do anything in his vulnerable state.

Meanwhile, Ram shows Krish the number plate and tells him that they found it among Priya’s belongings.

Krish gets shocked to hear that but decides to handle the situation calmly while listening to Ram.

Ram asks Krish not to mention Priya in front of her and dig into Mahender Sood’s crimes.

As Priya arrives with Meera, she reveals that Varun attacked her at the bakery.

Priya breaks down into tears as she requests Meera to convince Ram that she is not protecting her family as she does not want her marriage to break down.

Priya confesses that she loves Ram immensely and cannot bear to live without him.

With both Sarah and Priya on her side, Meera assures both her daughters that she will make things as they were before.

Priya leaves the house and decides to visit Mahender Sood to search for evidence.

Meanwhile, Ram lies to Ishaan and makes him call Varun to Sood’s house so that he and Krish can catch him.

However, Shivina comes while Ishaan converses with Varun and reveals that Varun’s criminal deeds are out and Ram will get him arrested.

Priya finds her bag in Mahender Sood’s house and calls Meera to check if Varun is home or not.

After deciding not to tell Ram as he will lash at her for taking a step by herself, Priya calls Krish to inform him about her bag at Mahender Sood’s house.

Krish asks Priya to get out of there immediately but Priya hangs up without listening.

Priya watches Mahender Sood and Varun talking to each other and records their conversation on her phone.