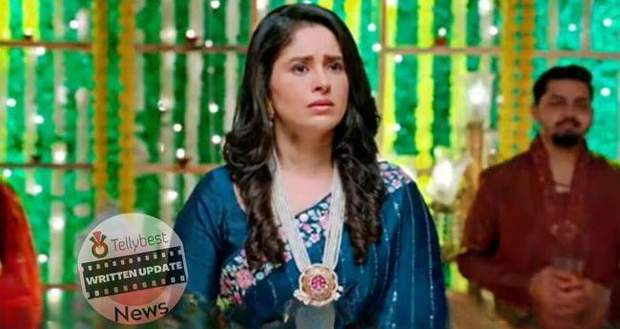 Shubham approaches Nandini and asks her if she is waiting to receive a slap like him since Ram is ready to welcome Priya inside the Kapoor Mansion.

Nandini then tells him that she pushed the property papers with their names under the sofa and it is still there.

Meanwhile, Ram finds Pihu's trust papers missing and everyone searches for them.

Afterward, Nandini goes to fetch them under the sofa but they are not there.

She gets afraid while Priya roams in the hall to find the trust papers.

On the other hand, Shubham almost announces to Ram that he has found the papers until Priya gets the original trust papers and hands them to Ram.

Pihu asks Priya what it is in those papers and Priya says they contain Ram's love.

Just then, Ishaan comes and shows the Dollhouse to an excited Pihu.

Ishaan almost takes Shubham's name in fixing the lights but Pihu doesn't let him finish & asks him to open the lights.

Nandini feels what is about to happen is not right & pushes both Pihu & Ishaan before they can turn on the lights.

She throws the Dollhouse away as the wires create a spark and burn the entire dollhouse.

Nandini then creates a fake drama, saying how can everyone be so careless not to notice the naked wire.

Brinda takes a scared Pihu upstairs so she doesn't have to listen to all the screaming.

Shubham jumps in and charges at Priya, blaming Ram for forgiving Ishaan so easily by terming Shivina's death as an accident.

Both he & Nandini don't give Ram a chance to speak while Priya says if it is because of the trust fund, she & Pihu do not need it.

Sarah stops Priya from speaking and tells Nandini to punish her instead but not Ram & Priya as they already suffered a lot.

Meanwhile, Brinda tries to engage Pihu who is worrying that someone will again try to separate RaYa.

On the other hand, Shubham scolds Sarah for another emotional drama but Vikrant asks him to shut his mouth as his hatred is not helping anyone.

Ram then questions Shubham about what he wants and Shubham utters the division of the property.

Ram looks at Nandini expectantly but she agrees with Shubham.

Later Pihu hugs an emotional Ram who asks Priya if she trusts him or not.

Sandy then thinks of telling Priya that she saw Shubham's shoes as he was hiding behind the curtain in the room where Dollhouse was kept.

After sometime, Ram goes to talk to Nandini who is sitting morosely in the room.

She emotionally manipulates Ram by asking him if he ever loved her or Shubham.

Ram feels helpless as he asks Nandini not to make him choose between her & Priya but Nandini tells him he has already chosen Priya.

© Copyright tellybest.com, 2022, 2023. All Rights Reserved. Unauthorized use and/or duplication of any material from tellybest.com without written permission is strictly prohibited.
Cached Saved on: Monday 21st of November 2022 04:10:42 AMCached Disp on: Saturday 10th of December 2022 01:53:01 PM