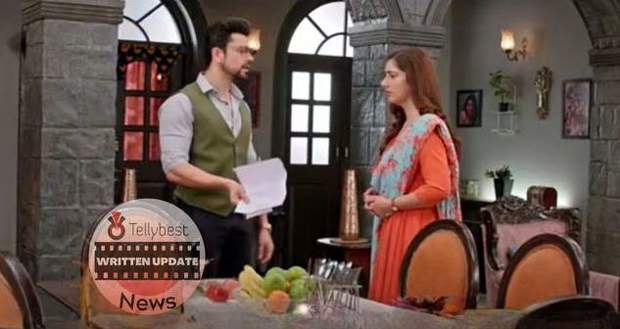 Priya asks Ram to go back to work but Ram states that if he leaves now, Pihu will meet Priya first and hate him again.

Sarah leaves from there and Priya explains to Ram that even though she didn’t tell Pihu about his father in past yet she had never bad-mouthed him to her.

Ram pleads that he just doesn’t want Pihu to hate him while Priya tells him that Pihu once tried hating him but failed due to Ram’s love and affection.

Sarah comes back inside the room as Ram leaves from there.

Priya shares her worries with Sarah regarding Pihu hating her for not telling her about Ram before.

Meanwhile, Meera takes Pihu to the temple where Pihu asks her if she knew about Ram being her father.

Meera explains to Pihu that it was Ram and Priya’s secret that they didn’t want to tell her.

Pihu tells Meera that her only intention was to bring Ram and Priya close and asks further how she can do that.

On the other hand, Ram returns home and gets anxious as Sarah hasn’t called him yet.

Nandini comes to Ram’s office with his medicines and asks him about Pihu.

As Ram tells Nandini about the situation, Nandini scolds him for saying things to Pihu that he wasn’t supposed to say.

Nandini gets angry when Ram further tells her that Pihu is with Meera while Vedika interrupts them all of a sudden.

Meanwhile, Meera tells Pihu the story of Maa Brahamacharini and how Maa Parvati did the ‘Tapasya’ to get Lord Shiva.

Vedika manipulates Ram into filing sole custody for Pihu and Nandini supports her.

As Nandini and Vedika leave, Ram hopes that Priya doesn’t mess up this time which will make him prove wrong before Nandini.

Later, Shubham and Sandy discuss the situation with Shubham sounding worried about Pihu and Ram.

Adi and Vikrant overhear the conversation and doubt Shubham’s intentions.

Meanwhile, Krish talks to Priya about Pihu and tells her what Pihu told him when she talked to him.

On the other hand, Vedika tries again to convince Ram to file the case while Ram denies her.

© Copyright tellybest.com, 2020, 2021. All Rights Reserved. Unauthorized use and/or duplication of any material from tellybest.com without written permission is strictly prohibited.
Cached Saved on: Saturday 1st of October 2022 09:59:35 PMCached Disp on: Sunday 2nd of October 2022 01:12:35 PM