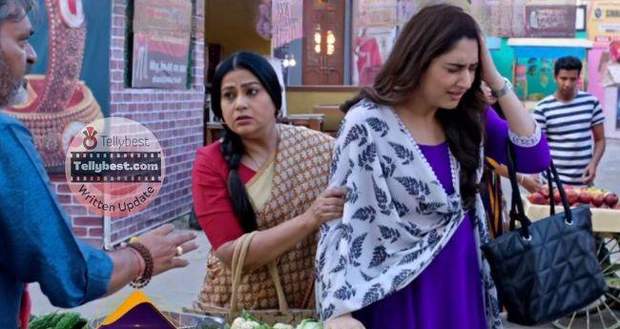 Today's Bade Ache Lagte Hain 2 27th December 2022 episode starts with Pihu crying while Priya tries to make her understand that her behavior with Nandini was wrong.

Meanwhile, Shubham and Sid enter Ram's cabin to ask him if he signed the deal papers with Yash Khanna.

This makes Ram angry as he asks both Shubham and Sid if they will teach him how to do business now.

Meanwhile, Pihu keeps crying to herself saying she won't behave well with Nandini since she didn't behave nicely with her papa, Ram.

Pihu finds herself alone and all of a sudden, Priya re-enters the room, posing as a student and doing a student-teacher roleplay with Pihu where Pihu is the teacher.

Priya addresses Pihu as the teacher and says she has one friend named Pihu but she did not behave well with her Dadi.

Priya asks the teacher whether it is the right thing or not.

Ram also arrives at Sood House since he heard Pihu crying on the phone and sees Priya & Pihu's interaction.

When Priya scolds Pihu, Ram intervenes and shushes Priya not to say anything to Pihu.

He cheers Pihu up by bringing her cupcakes.

Meera asks Priya to enjoy herself with Ram and Pihu since they both have gone through a lot.

Priya nods meekly and joins the laughing father & daughter duo where the father is a fierce protector of his daughter.

Suddenly, the plaster in Priya's room falls down and scares Ram as he pulls Priya closer to him.

He freaks out and asks Priya to pack her stuff, along with Meera's.

He dials Vikrant's number, asking him to find the best wall fixer in the city while Meera reasons that she can stay with Sarah and Vicky.

However, Ram doesn't budge and brings everyone to the Kapoor Mansion.

Later, Yash Khanna gets angry with Sid and Shubham since Ram's signature is not yet on the papers and gives them an ultimatum of twenty-four to get it.

Shubham blames Priya for this but Sid asks him over & over again not to go against Priya since it means going against Ram.

They both return home and find Ram asking Tarun to shift the luggage.

Shubham thinks Ram is throwing him & Nandini out but he later realizes that Meera, Pihu, & Priya are shifting.

Nandini leaves the hall and whispers to Shubhu & Sid on the way that if they think they can win by supporting Priya, then they are wrong.

Suddenly, Meera reminds Priya to eat since it has been four hours since she last ate, and Ram freaks out.

He gets anxious and scolds Tarun for not getting his pills on time while Priya brings him upstairs.

He makes her sit comfortably while Priya asks him what is the matter.

Meera arrives in their room & tells Ram that there is someone waiting for him for the next day's engagement and Ram asks Meera to feed Priya properly so her sunken cheeks grow rounder.

Priya tells Meera that Ram is behaving strangely but Meera reminds her of the loss Ram has gone through recently.

Meera advises Priya to be patient & enjoy every moment for now.

Meanwhile, Shubham talks with Yash Khanna on the phone who gives rude replies.

Priya hears this and confronts Mr. Kapoor for leaving work just because Pihu was crying.

She sarcastically asks Ram to leave his business and become a home dad for now and Ram actually likes the idea.

However, when Priya glares, he says he was just joking and calls Yash in front of Shubham.

Yash picks up the phone and puts it on speaker.

Ram apologizes to Yash for not showing up and invites him to his engagement with Priya.

Internally, Swati wishes she could also go and bless Ram with a happy married life.