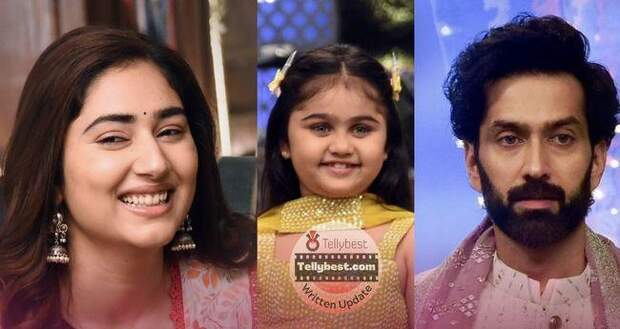 Today's Bade Ache Lagte Hain 2 27th January 2023 episode starts with Swati joining her hands in front of Ram and requesting him to save his brother Lakhan for his mother’s sake.

Ram then says that saving Lakhan is not in his hands because the case was filed by Yash.

He says that he has never seen someone as greedy as Swati Kapoor to which Swati finally breaks down and says that she is not greedy but did everything for his sake.

Swati says that she is not greedy like Nandini who blackmailed her to leave her son’s life forever.

Swati starts telling Ram everything from the very beginning when Ram accidentally pushed an employee from the building.

Nandini enters and says how dare Swati lie to Ram and then turns to Ram and says that Swati is lying so that Ram trusts her again and gives her a share of the property.

Priya enters and says that she has faith in Swati but not at all in Nandini because Nandini is capable of doing the worst thing imaginable.

Nandini says that since Swati broke her promise, now it is time for Nandini to break hers.

Ram angrily moves toward Nandini saying how dare she blackmail Swati right in front of his eyes.

Just then, the police enter and tell Ram that he is under arrest for Hitesh Ahuja's murder.

Swati wakes up and realizes that everything that just happened was a nightmare and not reality.

She immediately prays to God to save Lakhan and not let history repeat itself.

Meanwhile, Priya is dressing Pihu up as Lord Hanuman for a competition.

Pihu looks at a girl with her grandmother and tells Priya that she also wants a grandmother.

She goes to Swati dressed as Lord Hanuman and says that he has come to save her to which Swati replies not realizing the child is Pihu as she is very tense right now.

Pihu says that Swati should not worry as she is her angel grandmother.

Priya watches them from a distance and thinks that Pihu has blown her cover by calling Swati an angel Grandmother.

Swati hugs Pihu while Priya moves towards them and says that Swati is not alone as she and Ram will be by her side if she tells her the truth.

Hesitantly, Swati tells Priya the truth when Priya receives a call from Aditya telling her that he has found the hotel where Avni is kept.

Priya asks Aditya to stay there while she is on her way to the hotel.

She then tells Swati that she is going to find Avni and prove Lakhan’s innocent.

After a while, Priya reaches the hotel and disguises herself as a journalist so that she can intimidate the manager by telling her in which room Avani is.

Meanwhile, Swati goes to Nandini and hands her an ice cream cup and then says that from now on, Nandini will not be able to hurt Swati or her sons because Priya is by her side.

Swati openly challenges Nandini to do anything in her power to send Lakhan to jail as all she cares about is Ram who will soon be on her side.

Nandini thinks to herself that no matter what she will win this game.

© Copyright tellybest.com, 2022, 2023. All Rights Reserved. Unauthorized use and/or duplication of any material from tellybest.com without written permission is strictly prohibited.
Cached Saved on: Friday 27th of January 2023 11:59:12 PMCached Disp on: Thursday 2nd of February 2023 09:20:14 PM