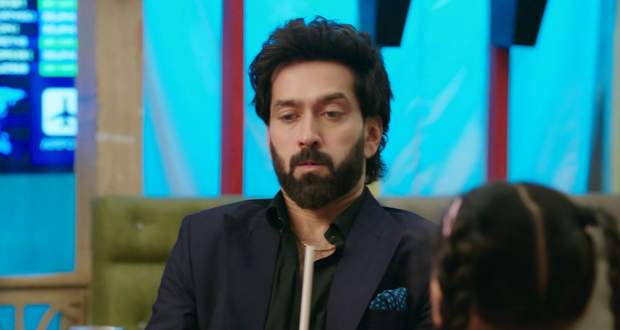 Today's Bade Ache Lagte Hain 2 27th July 2022 episode starts with Ram and Pihu at the breakfast table while they greet good morning to each other.

Ram gives Pihu her favorite sandwiches to eat but Pihu smudges the sauce around her mouth.

Seeing the funny face in front of him, Ram takes out his mobile and shows Pihu how absurd she looks with all the sauce on her face.

Ram asks Pihu to sit quietly and helps her to wipe the sauce off her mouth with the help of a towel.

After Priya decides to talk to Krish regarding the blackmailer matter, she spots Ram and Pihu laughing together and gets happy.

Shubham passes by Priya after bidding Ram and Pihu goodbye which again makes Priya suspect him.

Ram bids Pihu a goodbye and leaves for the office after which Priya comes and asks Pihu how she spent her time without her.

Pihu starts to rant about how Ram accompanied her in doing many fun things which makes Priya both happy and nervous as she does not want to separate Pihu from Ram.

Priya decides that she will not take away the precious time Pihu is getting with her father and fight as a mother.

Later, as the doctor visits for Priya’s physiotherapy, Vedika comes into the house and starts to mock Priya about her act of their fake marriage.

Telling Pihu to go and play, Priya reminds Vedika that she also adjusted with her as Ram’s wife in the past and expects her to do the same.

Vedika gets irked upon hearing that and sends Priya another message just when she spots Nandini coming down.

Seeing that the anonymous sender knows that Ishaan is the main culprit, Priya gets nervous and thinks that it is Nandini after seeing her with her phone.

Meanwhile, at the office, Ram tells Aditya about how he wants to know about Pihu’s taste in more detail but cannot understand whom to ask.

Aditya suggests Ram ask Krish which he follows for Pihu’s sake and goes to his house.

Priya was present in Krish’s house when Ram came but could not hear the bell from the kitchen.

Seeing Ram there, Krish coldly asks him what he is doing there and tells him about Pihu’s hobby of talking to stars for help.

However, before leaving, Ram spots Priya’s purse there and understands that she has come there to meet Krish.

Later, Priya prepares dinner for all of them while Pihu plans to give Ram the friendship card as she wants to plan Priya’s birthday with Ram.

© Copyright tellybest.com, 2022, 2023. All Rights Reserved. Unauthorized use and/or duplication of any material from tellybest.com without written permission is strictly prohibited.
Cached Saved on: Wednesday 25th of January 2023 03:39:54 PMCached Disp on: Sunday 5th of February 2023 01:41:47 PM