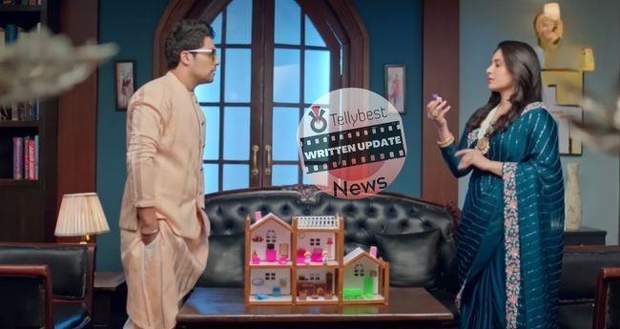 He denies doing so, and cries, on his knees on the floor.

Nandini says she can't live under the same roof as Priya because her presence will remind her of Shivina.

She sheds crocodile tears while Ram begs her to stay at Kapoor Mansion and not go anywhere, breaking this family and the business.

He holds Nandini's hand but Nandini's decision is firm as she tells Ram he never experienced her as his real mother.

Nandini leaves after telling Ram to give what Shubham wants, that is, a part of the Kapoor business and property.

Meanwhile, Sandy calls Krish and lets him know that she suspects Shubham to be behind this Dollhouse blast.

She further informs Krish that right after the blast, Shubham & Nandini started talking about the division of property.

Krish realizes the whole politics of this blast and asks Sandy not to reveal this to anyone until they have some proof.

At Sood House, Ishaan asks Meera if she believes him about the Dollhouse blast while Sarah tells Shubham whatever the case, Priya must not suffer now.

Just then, Pihu asks everyone what is the meaning of 'batwara' and Priya tells her the meaning by tearing her drawing paper from the middle.

Pihu says after hearing this word everyone got sad.

Meera then takes Pihu upstairs while Priya realizes the same toxic game Nandini is playing with Ram all over again.

Ram is stressed and stares at his father's photo in the office when he gets a call from Pihu.

Pihu asks him to come immediately to Sood House and he presses a kiss to the phone after she cuts the call.

Meera then tells Priya she should have been with Ram right now.

On the other hand, Vedika asks Nandini if she will burn RaYa's photograph with her eyes as she sits down beside her.

Nandini quickly wipes her tears and Vedika says Sandy & Krish have started inspecting the burnt dollhouse and their first target will be her.

Nandini gets scared for herself, thinking about Ram's reaction if he gets to know her involvement.

Later, after Ram arrives at Lover's Café, Pihu & Priya push Meera to go talk to him.

Ram doesn't meet Meera's eyes as she apologizes to him for not being a good mother to him.

He then emotionally lets Meera know she is the reason behind his destruction.

© Copyright tellybest.com, 2022, 2023. All Rights Reserved. Unauthorized use and/or duplication of any material from tellybest.com without written permission is strictly prohibited.
Cached Saved on: Monday 21st of November 2022 06:51:38 AMCached Disp on: Wednesday 7th of December 2022 03:12:15 PM