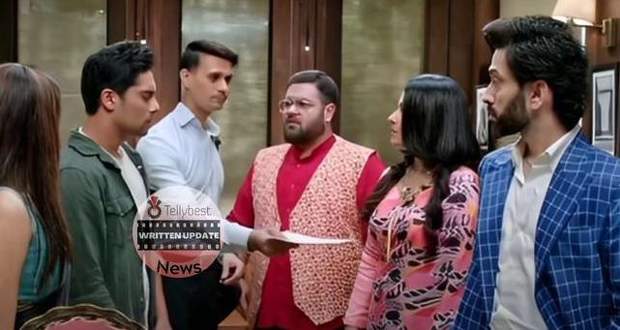 Today's Bade Ache Lagte Hain 2 27th September 2022 episode starts with Ram and Priya getting a notice of custody at the same time and brimming with anger directed at each other.

Both decide to confront each other at the court and talk directly so that everything gets clear between them.

Meanwhile, Pihu prays to God and says that she has done something from her side to make things right.

Pihu asks God to help in her mission and steals the 'chunri' (sacred cloth) from the idol’s head as a form of testament.

After reaching the court, Ram and Priya start arguing with each other in front of the judge regarding who sent the notice to whom.

The judge stops them and says that the case is not about sole custody but a claim for joint custody from a certain person.

Just then, Pihu enters there, and Ram and Priya get to realize that Pihu is the one who lodged the case from her side.

Ram asks the judge how can a small child of five years be allowed to lodge a case to which Meera says that she signed the documents as Pihu’s guardian.

Pihu tells the judge how Ram and Priya fight with each other all the time and want her to choose between them.

Making it clear that she wants to live both with Ram and Priya, Pihu says that she is ready to lodge a case against them.

The judge gives Ram and Priya a deadline of one month to live together and be loving toward Pihu so that she can take her decision.

It gets decided that Pihu will have the right to choose with whom she wants to live after one month and she can also ditch both Ram and Priya.

Ram and Priya get stunned to hear that and mentally prepare their strategies to convince Pihu.

Later, Vikrant gets a message from Sarah and rushes to the bakery with Aditya.

Meanwhile, the lawyer instructs Pihu to reach her anytime and leaves the court while Ram and Priya stare awkwardly at each other.

© Copyright tellybest.com, 2020, 2021. All Rights Reserved. Unauthorized use and/or duplication of any material from tellybest.com without written permission is strictly prohibited.
Cached Saved on: Saturday 1st of October 2022 10:24:22 PM