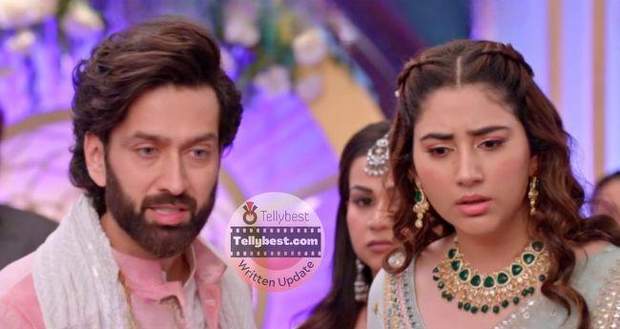 Priya smiles and comforts Ram, telling him not to worry since Swati's blessings will always be with him.

The next day it is Ram and Priya's engagement day and Pihu runs to see Ram.

However, while running, Pihu collides with Nandini and falls down.

Nandini apologizes to Pihu but Pihu keeps glaring at her.

Ram tells Pihu that it happened mistakenly while Shubham taunts Nandini to keep aside her tactics for one day since Yash Khanna is coming to their house.

Nandini looks at Shubham in disbelief and leaves while Pihu announces to Ram that she has a special performance for him.

Sid and Shubham stand beside Ram and greet Yash personally and guides his daughter, Avni, and Veena to where Meera Ma is sitting.

Shubham talks gently with Meera Ma, forcing her to think how much he has changed.

Meanwhile, Yash forgets the important business file at his home and tells Ram that he will ask his household help, Swati Ji, to bring it here.

Swati is crying in her room and wishes that she could go and bless Ram on this special occasion herself.

Just then, she gets a call from Yash who asks her to come with the Kapoor Industries file to Kapoor Mansion and she decides to go there, even if she can see Ram sneakily.

Ram also misses Swati internally and wishes she was here and introduces Pihu to Yash.

On the other hand, Sid and Shubham drink and talk and Sid says he wants to marry Avni by impressing Yash so he can take over the Khanna business.

Shubham laughs and asks him if this is his next plan and Sid nods, saying this way he or Shubhu won't have to depend on Ram.

Upstairs, a dolled-up Priya reveals to Brinda that Ram is getting hyper these days.

Brinda volunteers to scold Ram but Priya says she will handle it.

Ram enters the room and asks Priya if everything is alright, forcing her to make a face.

Brinda leaves them alone to talk and Priya asks Ram how he is doing because, for every little thing, he is getting hyper these days.

Swati comes but hesitates to go inside Kapoor Mansion.

Meanwhile, Ram gives a spectacular performance of Tenu Leke song joined by Priya whom he twirls around.

Later, Swati calls Yash and lets him know that she will send the file via the security guard.

However, he asks her to come in and she hides at the very back.

Everybody claps when RaYa exchanges rings and Priya remembers how they got engaged before.

Yash Khanna then tells Nandini that she is lucky to get such sons and while turning around, Nandini knocks over Swati's photograph.

Pihu gets angry and yells that she hates Nandini since she wishes bad for her parents.

Yash's family gets stunned while a crying Pihu asks Ram not to go away since this is what Nandini wants.

Nandini feels humiliated but believes Ram will scold Pihu since he won't let her get down in front of the guest's eyes.

© Copyright tellybest.com, 2022, 2023. All Rights Reserved. Unauthorized use and/or duplication of any material from tellybest.com without written permission is strictly prohibited.
Cached Saved on: Wednesday 25th of January 2023 07:35:42 PMCached Disp on: Wednesday 1st of February 2023 05:39:32 PM