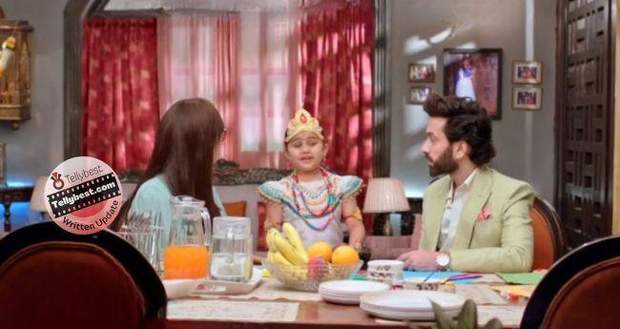 He sees photos of Lovely and Meera along with Pihu but no photograph of a male in the family.

Ram gets curious and asks Meera about Lovely’s husband and Pihu’s father.

Meera gets awkward and answers Ram that Pihu’s father is only here but not as Lovely’s husband.

Ram gets angry and states that man does not deserve Pihu at all, and thinks Krish might be her father.

Vikrant accepts that they made fun but also questions Shubham whether he has the guts to attend the meeting and convince the client without Ram.

Shubham accepts the challenge while Priya who is hiding beneath the table grins.

However, Sidharth sees a woman’s purse on the table but Shubham takes him away.

Meanwhile, Ram gives Pihu some ideas as to how to dress up.

Lovely arrives there and sees Ram and intentionally taunts saying if she stays too long with her unhealthy boss, she will derive his unhealthy eating habits.

Ram chimes in, and taunts Lovely that this is what she thinks of him.

Just then, a happy, dancing Pihu dressed as Hanuman arrives and gives Priya a surprise.

Ram gets delighted to see Pihu as she hugs him and thanks him.

Meera whispers into Priya’s ear, saying life is playing differently with her.

On the other hand, the client tells Shubham that he does not want to work with him but Ram.

Shubham pressurizes Adi & Vikrant to call Ram who is with Priya at Sood House.

Priya realizes that Shubham must have messed up while Ram gets into a dilemma about whether to stay with Pihu or go and help Shubham.

Priya gives clarity to Ram and advises him not to go since Shubham must become independent and realize, he has to prepare since it is his meeting.

Ram agrees not to go while Shubham gets enraged.

With Pihu as his priority right now, Ram asks Priya to play the role of Sita so Pihu can memorize her lines better.

Lovely says no while Ram winks at Pihu to convince her strict mother.

At Kapoor Office, the client leaves, while Shubham gets shaken up.

He tells Adi & Vikrant to call Ram right now but Aditya gives it back to Shubham, stating he cannot use Ram always.

Both of them get into a heated argument with Vikrant holding Aditya back.

They both leave Shubham whose nostrils fume in anger as Sid asks him to relax.

Pihu and Ram spend the whole day together after which Meera advises Lovely to take Ram out for dinner.

Ram suggests the café owned by Sarah as Priya feels a rush of butterflies hit her belly as she will be spending time alone after a long time.

© Copyright tellybest.com, 2022, 2023. All Rights Reserved. Unauthorized use and/or duplication of any material from tellybest.com without written permission is strictly prohibited.
Cached Saved on: Monday 28th of November 2022 09:45:19 PMCached Disp on: Tuesday 6th of December 2022 02:08:47 PM