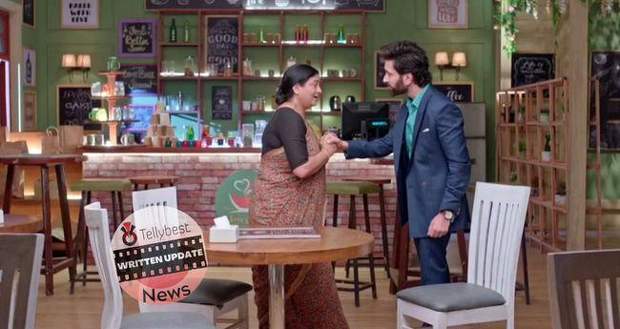 Today's Bade Ache Lagte Hain 2 28th October 2022 episode starts with Ram telling Meera that she is the reason Priya left him and wasn't able to trust him till now.

His eyes fill with tears as Meera apologizes profusely.

However, he asks Meera how she can come to him like nothing happened as he was left all alone to suffer for one lie that she told.

Meera gets emotional and hugs Ram immediately, telling him she is sorry for not being there for him when he needed her to support the most.

Meera says she lied to save Ishaan which made her abandon her other kid (Ram).

Ram cries and finally hugs Meera back, while Pihu and Priya watch their emotional exchange from a distance.

Meanwhile, Shubham asks Nandini if she is waiting for Ram to kick them out of the Kapoor Mansion.

Just then, Sandy enters his office and Shubham worries whether she listened to his conversation or not.

Nandini stays on the speaker as Sandy tells Shubham he did wrong for hurting Ram.

She further states that Shubham has no stake in the company since it is all built by Ram and everything belongs to him.

She storms out while Vedika tells a worried Nandini that Priya and Pihu are to blame for all of this.

Meanwhile, Ram tells Meera he doesn't want to divide the company that his father built so dearly.

Priya then steps into the conversation and tells Ram he should give everything to Nandini & Shubham.

Ram gets confused since Priya & Pihu have equal rights over his money and property.

Priya being Priya asks Mr. Kapoor to go on an adventure with her and Pihu.

Ram laughs after a long time and kisses Priya's knuckles.

On the other hand, Nandini burns RaYa's and Pihu's Diwali photograph and states she will snatch everything from Ram.

At Sood House, Ram asks Meera if he can make Priya his forever and Meera cries happy tears.

Afterward, Sandy comes back home and stares at the burnt Dollhouse.

She then notices Priya sitting who tells her that her marriage with Ram is the next day as they have decided to part ways with Nandini & Shubham completely.

Sandy doesn't tell about Shubham to Priya and playfully sees her off to sleep.

However, Priya hears her talking to Krish about Shubham being the suspect behind the burnt dollhouse and gets worried.

At Kapoor Mansion, Nandini gets informed that Ram hasn't called the lawyer for the division of the property yet.

She then decides to wage a war against RaYa while Vedika suggests opting Mahendra Sood's strategy that he used upon Sashi's advice.

© Copyright tellybest.com, 2022, 2023. All Rights Reserved. Unauthorized use and/or duplication of any material from tellybest.com without written permission is strictly prohibited.
Cached Saved on: Monday 21st of November 2022 01:34:04 AMCached Disp on: Friday 9th of December 2022 04:21:54 AM