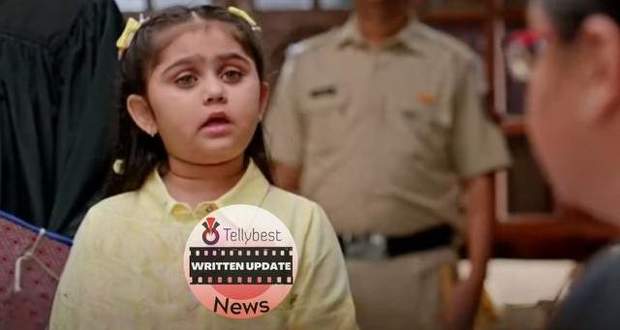 Today's Bade Ache Lagte Hain 2 28th September 2022 episode starts with Priya and Ram asking Pihu why she decided to go to court for the case when they are here to fulfill her wishes.

Pihu asks Priya and Ram that if they are ready to live together, she won't go the court but both Ram and Priya turn silent.

Sarah supports Pihu and says that she is doing the right thing by claiming her wishes legally and trying to turn them into reality.

Ram and Priya do not seem pleased with the situation but stop arguing as they know it is meaningless.

As Ram is about to leave, Pihu asks him to kneel closer to her as she has something to tell him.

Ram crouches down to Pihu’s level and asks her what the matter is all about to which Pihu says that she did not have the opportunity to say it before but now wants to be precise.

Pihu expresses to Ram how she is more than happy after getting to know that he is her father and engulfs Ram in a warm hug.

Ram also hugs Pihu tightly in his arms as he had always wanted to do while Priya watches them with tearful eyes.

After Priya arrives home with Pihu, Krish comes to hang out with Pihu while Sarah converses with Priya.

Sarah tries to make Priya understand that even though she pushed all of them out of her life five years ago, her family is standing with her but Ram does not have anyone like that.

Priya realizes the thing Sarah is trying to improvise and wishes that Ram accepts the emotional support from Adi and Vikrant.

Meanwhile, Nandini comes to meet Ram at the office and asks if it was Priya who made Pihu sue him.

Ram informs Nandini that it was Pihu’s sole decision while Nandini begins to sow seeds of hate in Ram against Priya.

However, Ram asks Nandini why she hid the truth about Priya carrying his child five years ago and deliberately lied that it was Krish’s.

Nandini panics internally as Ram resents her for betraying him and she begins to apologize to him so that the situation does not get out of hand.

Assuring Ram that she will bring Pihu back to him, Nandini refuses to enter the Kapoor Mansion without Pihu.

Ram forgives Nandini and says that without her and Shubham, he does not have anyone he can call his own family.

© Copyright tellybest.com, 2022, 2023. All Rights Reserved. Unauthorized use and/or duplication of any material from tellybest.com without written permission is strictly prohibited.
Cached Saved on: Monday 21st of November 2022 06:57:18 AMCached Disp on: Saturday 10th of December 2022 01:52:12 PM