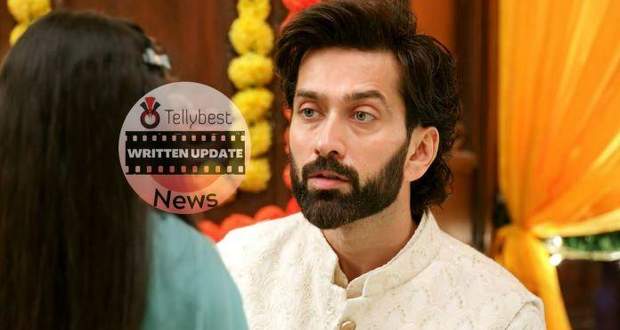 Priya says that she will not let Nandini trample on her and her loved ones’ lives this time as she has chosen to fight.

Hearing that Priya overstepped her plan, Nandini gets furious at once and decides to question Kanika along with Vedika.

Pihu plans a Janmashtami treasure hunt in which Ram and Krish will compete against each other by completing fun activities.

Vedika and Nandini question Kanika about her betrayal of not exposing Ishaan’s video to the police as her move ruined their plan completely.

Instead of Kanika, Priya speaks while entering the room and tells Nandini and Vedika that Kanika has chosen to be selfish for her own sake.

A flashback shows Priya getting to know through Brinda that Kanika has called the police and hearing Ishaan’s confession video.

Priya threatens Kanika that if she reveals the video to the police or causes any scene, she will expose the recording of her assaulting Ram in front of the temple.

Kanika gets scared of her life as the minister’s wife getting ruined and listens to Priya obediently.

After Nandini hears about this, she denies believing that Priya has the recording of that day and says she is bluffing.

Priya says that she has the CCTV recording outside the temple from that day that Krish helped her get.

Warning Nandini that she will do anything for her family’s sake, Priya says that she has almost decided that she shall stay with Ram.

Nandini tries to scare Priya by telling her that she will expose her time in jail to Pihu but Priya confidently faces her as she knows that Pihu loves her immensely.

Later, Priya tells Krish about everything and Krish suggests she and Pihu leave the house at the earliest.

Ram mistakes Krish’s words as acceptance of his decision to get back together with Priya and thanks him for letting Ram be the father of Pihu.

After Krish leaves, Priya says that she has not told Krish about that matter yet and Ram hurt him by saying those things.

The first round of the Janmashtami treasure hunt starts with Pihu announcing that Ram and Krish have to find their Radha.