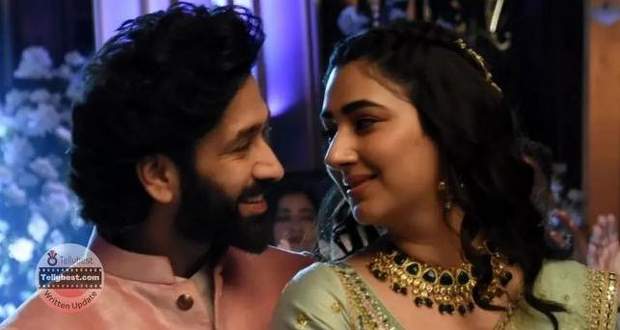 Today's Bade Ache Lagte Hain 2 29th December 2022 episode starts with Pihu looking up at Ram with tearful eyes and telling him that Nandini wants her and Priya to stay away from him.

Ram hugs her and then bends down to pick up Swati's photo and asks Aditya to keep it back nicely in his room.

Yash Khanna and his family watch the drama unfold at Kapoor Mansion when Priya says whatever Pihu did is wrong and she must apologize to Nandini right now in front of everyone.

However, Pihu denies doing so and yells she won't say sorry to mean Dadi.

Ram states that his daughter will not apologize to anyone, shocking both Priya & Nandini.

Ram says that the breaking of Swati's photo frame is not the reason behind Pihu's anger.

It is because Nandini tried to separate him from Pihu, and that is the reason.

Shubham worriedly whispers in Sid's ear to do something since Yash Khanna might cancel this deal.

Sid tells Ram to put this topic under the shrug and not create a bad impression but Ram tells him that right now, Pihu is important to him and nothing else matters.

Meanwhile, Priya puts her point across by saying this is not the best way to express anger but Ram stays adamant, making Priya leave the hall.

Pihu apologizes to Ram and cries that she has made Priya upset but Ram says they will find her mother together.

On the other hand, Swati is sitting outside and cries, thinking she had the right to be in Ram's life, not Nandini, and share his happiness.

She then thinks if Ram was in Lakhan's life, then maybe Lakhan wouldn't turn out angry due to the financial toll and rough childhood he had to go through.

She then calls Yash and informs him that she has brought the file but Yash tells Swati she can leave since the file is not needed now.

Sid and Shubham become dejected as Yash Khanna sarcastically tells them "thank you" for the invitation and leaves Kapoor Mansion.

Nandini fixes her tears by looking at her phone's camera but sees Swati sitting just behind her.

Swati hides behind a pillar while Nandini announces that she has seen her.

However, Priya tells Nandini it was her as she went outside to get some air.

Nandini warns Priya not to play these games and use Pihu to oust her from the house.

Priya internally thinks that nothing can change Nandini and vows not to make Pihu a replica of her Dadi's anger.

Ram and Priya argue again when she goes inside about how to douse down Pihu's anger.

Meera takes Pihu upstairs while Brinda and Sarah intervene saying as a mother, Priya is right.

The whole atmosphere lightens up when Sarah reminds them they still have dance practice to do for the Sangeet function.

Ram stutters in front of Priya and says he will be back with a comeback.

Sid and Shubham then crowd him and emotionally dramatize the whole situation saying that Sid has started to love Yash's daughter, Avni, & that is why he is putting in so much effort.

Ram tells him that he will fix the situation & talk to Yash.

He yells at Meera and asks her to leave, to make Pihu understand her mistake of yelling at Nandini.

© Copyright tellybest.com, 2022, 2023. All Rights Reserved. Unauthorized use and/or duplication of any material from tellybest.com without written permission is strictly prohibited.
Cached Saved on: Wednesday 25th of January 2023 09:20:04 AMCached Disp on: Tuesday 31st of January 2023 07:00:44 PM