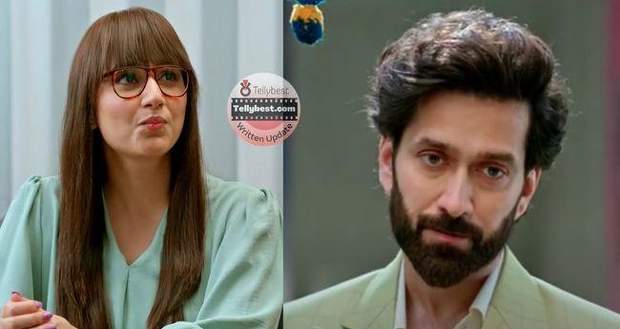 Today's Bade Ache Lagte Hain 2 29th November 2022 episode starts with Shubham calling Nandini and letting her know that Ram wasn’t there to have his back for the meeting.

Shubham says that Ram doesn’t care about them the same way he used to.

He even asks Nandini whether Ram has genuinely lost his memories & is acting.

Meanwhile, Ram and Priya arrive at the café run by Sarah who is in a hurry to meet Vikrant.

However, Sarah gives the keys to Ram and Lovely (Priya) & asks them to shut the cafe down properly as she has to go.

While sitting and looking at Lovely, Ram says he feels a certain sense of comfort with her until he gets interrupted by Nandini’s call.

Nandini questions Ram about where he was while Shubham was in the meeting.

Ram answers the question diplomatically and tells Nandini that they cannot babysit Shubham every time.

Ram states that Shubham should have prepared beforehand but Nandini instigates Ram to be responsible for dim-witted Shubham.

However, Ram tells Nandini that he will ask the client to come again but Shubham has to win the deal himself.

Priya then tells a story of how she made Pihu write the counting from one to ten one day.

Stating that it can be difficult when dear ones are angry with us, Lovely reminds Ram that he has to focus on the reason he is doing this to make Shubham independent.

Ram nods and eats the food while Priya internally vows to mold Ram in such a way that he can retort to their enemies himself.

Meanwhile, Meera Ma narrates the story of how Ram Ji saved Sita and how Hanuman helped take Ram’s message to her.

Pihu stresses how to make RaYa united again while Meera suggests the little missy be a kid and enjoy her life.

On the other hand, Shubham drinks alcohol with Sid, and Nandini calls Sid to ask about Shubham.

She asks Sid to help Shubham in the presentation and also spy on Ram since he is not at home or in the office at the moment.

Ram tells Lovely that Vedika is not his girlfriend but they once used to date.

Lovely poses a question and asks Ram if he still loves Vedika while he stays quiet.

Ram then questions Lovely about Pihu’s father and where he is.

Priya tells Ram that Pihu’s father is awesome but just not there while he encourages her to bash him as she can even scold the boss.

Later, Lovely scolds Ram for not eating the full meal and Ram thinks of excuses as to how he can meet Pihu the next day as well.

The next morning, Ram gets confronted by a drunk Shubham who tells him he will treat him as his brother at home but as MD in the office.

Ram gets hurt and calls Shubham on his cell phone, saying he should pick up this call since it is MD calling him.

© Copyright tellybest.com, 2022, 2023. All Rights Reserved. Unauthorized use and/or duplication of any material from tellybest.com without written permission is strictly prohibited.
Cached Saved on: Wednesday 25th of January 2023 08:24:13 PMCached Disp on: Thursday 2nd of February 2023 07:26:51 PM