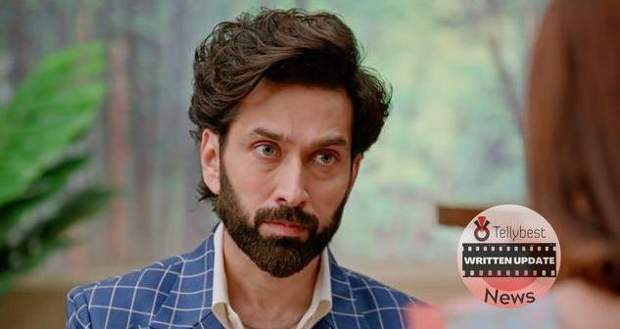 Sarah jokes that Pihu is the first child in the world to get her parent's custody when suddenly, Shubham calls Pihu and gives the phone to Nandini.

Nandini says that since Meera Nani is helping Pihu a lot, Nandini also wants to help Pihu and asks her to bring Priya over to Kapoor Mansion for a surprise party.

On the other hand, Priya discusses with Meera how Pihu loves to paint while Pihu arrives and compliments Sarah on the pineapple cake she made.

Pihu suddenly gets grim when Priya asks her to draw ‘Ravan’ but Pihu says she can’t do this alone now since Mr. Khadoos is a part of their lives too.

Sarah reminds Priya that Dussehra and her marriage anniversary are falling on the same day which urges Pihu to make the special party organized by Nandini even more special.

At Kapoor Mansion, Ram gets surprised when he sees Pihu as she tells him she is here to celebrate Dussehra with him.

Further, Nandini promises Ram to be the kind of mother he deserves.

Later, Ram takes Pihu shopping and sends a message to Priya to join them as well.

At the designer store, Pihu chooses a dress that has the MRP with four zeroes while Ram laughs and says he has many zeroes like that in his bank account.

Pihu gets annoyed as Ram doesn’t even remember the date he got married to Priya and wants Priya to wear the gown on the occasion.

While Pihu goes to change, Priya arrives at the designer store and bumps into Ram.

Within seconds Pihu shows up and shows her pink dress to her parents and says she wants all three of them to wear matching outfits.

Priya says no and gets into a debate with Ram making Pihu cross her arms in annoyance and ask the staff whether her parents look like they are fighting or not.

Ram leaves after he gets a work call while Pihu urges Priya to wear the white designer dress she liked.

Pihu disappears as soon as Ram gets free from the work call while Priya asks Pihu’s help to do the zipper.

Upon seeing Ram, Priya gets flustered and says she will change into normal clothes while Ram doesn’t leave the chance to be closer to Priya.

He holds Priya by her back and does the zipper as his fingertips make Priya experience goosebumps.

Looking into Priya’s eyes intently, Ram strokes her hair and looks at her as if he hasn’t looked at Priya properly in the last five years.

© Copyright tellybest.com, 2022, 2023. All Rights Reserved. Unauthorized use and/or duplication of any material from tellybest.com without written permission is strictly prohibited.
Cached Saved on: Monday 21st of November 2022 02:56:59 AMCached Disp on: Sunday 4th of December 2022 11:36:08 PM