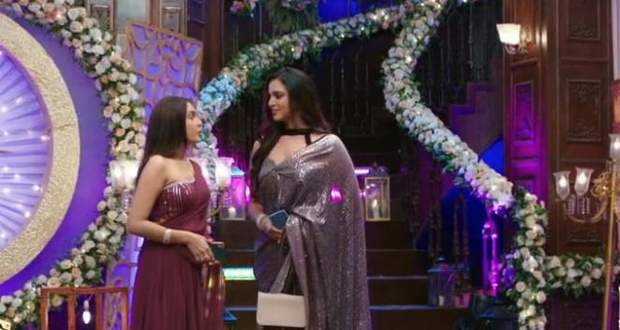 Today's Bade Ache Lagte Hain 2 2nd August 2022 episode starts with Pihu meeting Krish at the function and hugging him with love as she thinks he is the one who bought Priya’s dress.

However, Krish denies taking credit for bringing Priya’s dress and reveals the truth to Pihu that he was not the one who bought it.

Meanwhile, Ram comes down and greets the ministers with champagne as a generous host.

Priya and Maitri come down the stairs while Vedika gets ready to send the threatening message to Priya once Maitri has fallen down.

Vedika mistakenly sends the message to Priya on bumping into Pihu.

Instead of Maitri, Priya steps on the oil and slips from the stairs but Ram comes at the end moment and saves Priya from falling.

Everyone gets shocked to witness such an accident and rushes toward Priya to check on her.

Maitri also almost falls from the stairs but gets saved by Nandini and Shubham.

Trying to find the cause of the slippery floor, Nandini blames it all on Ram and says that it is because of the muddy shoes that he wore earlier.

Krish announces that Ram got his shoes muddy because he went to the Dombivelli market to buy Priya’s dream dress.

Hearing that, Nandini gets furious while Priya gets anxious as she knows Nandini and Shubham will not like it.

After making sure that both Maitri and Priya are all right, Ram resumes the party and starts the ceremony.

Priya decides that she will not let what happened 5 years ago repeat itself and will fight Nandini this time as she cannot leave Ram in trouble.

Recalling the message she got before the accident; Priya decides to search for Nandini’s phone from where she is texting her.

At the same time, Ram, Pihu, and others dance together to a Punjabi song and enjoy themselves.

Vedika tries to take Priya’s phone so that she can delete the message but Pihu comes and takes it away from her.

After entering Nandini’s room, Priya discovers Nandini’s medicines in the trash and gets confused.

© Copyright tellybest.com, 2022, 2023. All Rights Reserved. Unauthorized use and/or duplication of any material from tellybest.com without written permission is strictly prohibited.
Cached Saved on: Monday 21st of November 2022 06:26:11 PMCached Disp on: Thursday 1st of December 2022 11:07:24 PM