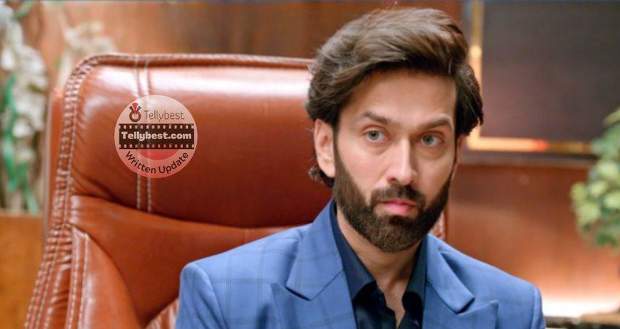 Ram & Vikrant cheer for Priya as she signs the document along with Pihu who winks at Ram and says he should also sign the document fast.

Priya looks at Pihu sternly in a humorous way. Meanwhile, Vedika scans through the papers left idle on the sofa at Sood House while Nandini & Meera Ma have a confrontation.

Nandini tells Meera that she will not allow Priya to come near Ram again. Meera gives a savage reply and says she doesn't care whether Ram remembers Priya or not but she prays every day that he realizes how evil Nandini is.

Nandini fears that Priya is somehow closer to Ram while Vedika shows her the address of the skit she found on the sofa.

At Ram's office, Lovely and Ram shake hands after the document is signed and Pihu's father promises her that he will play the role of Ram for her.

Before seeing her off, Sarah gives Priya a hug and asks her to win it for Pihu. On the other hand, Ram is rehearsing his line in his room in front of Aditya & Brinda.

Brinda finds it too cute and tells Ram it feels like he is doing it for his daughter and Ram agrees. Aditya wishes that no trouble comes in between no but just then Tarun informs Ram that Nandini has returned.

Nandini starts emotionally manipulating Ram again while Aditya & Brinda eavesdrop on their conversation. Brinda wishes someone to knock some sense into Nandini as she pushes Aditya to interrupt and take Ram away from her.

Aditya winks at Ram that there's an important meeting and leads him to Pihu's school. However, Ram finds Pihu crying with Lovely backstage and asks her what is the matter.

Pihu says that the teacher changed the rule last minute and Ram & Priya cannot act with her on stage. Lovely tells Pihu that life is not always fair while Ram asks Pihu to do it like he taught her.

Pihu follows Ram's advice and narrates Hanuman's lines perfectly as Priya and Ram clap for her. At the end of the skit, Pihu opens her jacket and reveals Priya & Ram's photo, mimicking Hanuman's gesture of opening his heart & showing Ram & Sita.

Ram tells Lovely that she is his daughter and then feels awkward. Meanwhile, Nandini & Vedika also reach the same place and realize that Lovely is none other than Priya.

However, they get greeted by Meera at the entrance. Meera looks savagely at Nandini and says she must not be shocked as this is a slap from a mother whose daughter's life Nandini tried to ruin.

When Priya and Ram go on stage to receive the trophy, Meera intentionally announces that Ram's mother is also here and it would be good if she can congratulate Pihu on this memorable day.

© Copyright tellybest.com, 2022, 2023. All Rights Reserved. Unauthorized use and/or duplication of any material from tellybest.com without written permission is strictly prohibited.
Cached Saved on: Wednesday 25th of January 2023 09:58:16 AMCached Disp on: Tuesday 31st of January 2023 08:03:14 PM