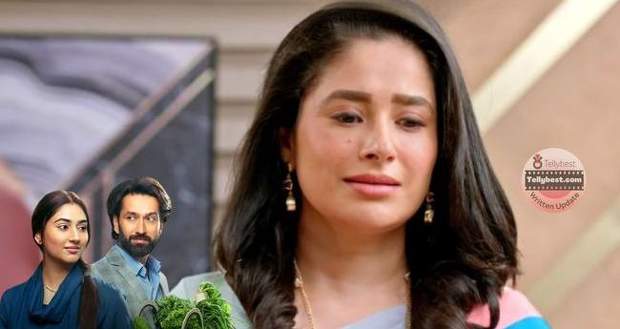 Priya tells Ram that he looks the best when he laughs while Ram teases her and says that she is trying to flirt with him.

Priya says that she will flirt with him, after all, she is in love with him and there is nothing to be ashamed of.

Everyone in the room agrees with her words.

Sarah says that there should be a couple dance for Ram and Priya at which Ram mumbles that he already dances at Priya's fingertips.

Priya holds Ram by his arm and asks him if he will dance with her.

Vikrant and Aditya hold Ram's other arm and start pulling him towards their side saying that he will dance with them.

Priya asks Ram while pulling him onto her side how can he choose friendship over love.

Vikrant and Aditya ask Priya to stop blackmailing Ram while Sara joins Priya's side and asks Vikrant to shut up.

Pihu brings a halt to the playful tug of war by telling everyone to release Ram and stand in a line.

She reminds everyone that she is the wedding planner and will take the decision.

Priya tries to bribe Pihu by promising to make her a double cheese sandwich.

Pihu asks everyone to decide on the songs when Shubham arrives and excuses Ram from there.

Shubham tells Ram that Yash has said yes to Avni's and Sid's marriage.

Ram asks if Avni has said yes or not because her consent is very important.

Sid replies that Avni will never let down Yash's words.

Ram hugs Sid and tells him that his patience has brought him this happiness.

Pihu calls Ram back to decide on the song.

Meanwhile, Lakhan breaks the news of his contract to Avni and also tells her that he will finally be able to go to her father to seek wedding approval.

Avni is scared that her father will not approve of the wedding, but Lakhan assures her that everything will be alright.

Meanwhile, Nandini confronts Swati and asks her why she has appeared after so many years and has gone to Kapoor's mansion.

Swati confesses that Yash has called her into the city, and she works in the Khanna mansion. It was her compulsion, and she didn't come here voluntarily.

Nandini accuses Swati that she is back for Ram's money and then threatens her that she will destroy Ram's life by releasing the evidence she has against Ram and will put him in jail.

Swati begs Nandini to not do anything of that sort but Nandini leaves.

Back at Kapoor's mansion Ram and Priya gets dressed for the sangeet ceremony and they discuss how Pihu has suffered so much at such a tender age. Ram says that he will make sure no one ever snaps at her.

Priya says that she doesn't want to spoil Pihu but wants Pihu to pick up Ram's best traits.

Ram pampers Priya and says that she needs to stop worrying so much.

Ram tells Priya that he can't see tears in Pihu's eyes because it's his weakness.

Priya explains to him that this is one of the most challenging parts of parenting, but it is also a necessary one. They have to be a little strict at times if they want their daughter to turn out as a good human being.

Ram understands and says he will need Priya's support throughout the journey and hugs her.

Pihu happily watches them from a distance and prays to God not to take her happy family away from her and promises to be a good girl to everyone.