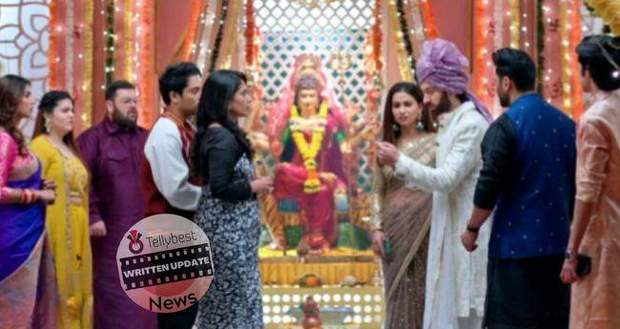 Today's Bade Ache Lagte Hain 2 2nd November 2022 episode starts with a flashback occurring in which Vedika suggests Nandini get Pihu to write a letter to Ram, stating that Pihu and Priya are running away.

The flashback ends and Ram reads the same letter while Sarah & Brinda ask Ram not to trust anyone.

Shubham pretends to cry, telling Ram he and Nandini are the reason that Pihu took this step.

Sandy shakes her head in disbelief at Shubham's hypocritical nature.

To gain Ram's trust, Nandini starts shaking Shubham's shoulders, asking him to find Priya and Pihu as Ram has dedicated all his life to him and Shivina.

However, Ram removes his pagdi and goes to Krish.

Krish sees tears in Ram's eyes and gets scared.

Ram shows him the letter written by Pihu where she has drawn a fuljhadi at the end, clearly stating that she is in danger.

Meanwhile, Pihu cries and tries to wake up Priya, praying to God to get Mr. Khadoos here as soon as possible.

Suddenly, Priya groans and wakes up while a crying Pihu tells Priya how two uncles came and kidnapped her.

She also tells Priya she drew a fuljhadi in a letter to indicate that they are in trouble that Vedika forced her to write.

Meanwhile, Vedika comes into the room and Priya pretends to be asleep again.

To get Vedika's phone out of her grasp, Pihu charges at her & shakes her hands which makes her phone tumble out of her hands.

Vedika goes out after getting irritated while Priya compliments little Pihu for her bravery.

She then decides to call Nandini from Vedika's phone while Vedika comes into the room and asks a woken-up Priya where her phone is.

Priya dials Nandini's number and keeps the phone away, and confronts Vedika.

Priya says Nandini is not a criminal like Vedika who got her and Pihu kidnapped.

Intentionally speaking that Ram was ready to put all his property under Nandini's name, Priya catches Nandini off guard on phone making her think that she messed up.

Nandini gets scared, thinking why she followed Vedika's advice and asks Ram to go to the farmhouse as Vedika is the only suspect under the radar.

Krish agrees with Nandini who advises Ram to call Vedika from her phone.

Meanwhile, Vedika glares at Pihu when she sees her phone fall down on the floor.

She then gets Ram's call who asks her to release Priya and Pihu safely.

However, Vedika threatens to punish Pihu if Ram comes to the farmhouse along with the police.

© Copyright tellybest.com, 2022, 2023. All Rights Reserved. Unauthorized use and/or duplication of any material from tellybest.com without written permission is strictly prohibited.
Cached Saved on: Monday 21st of November 2022 04:13:47 AMCached Disp on: Monday 5th of December 2022 12:04:41 AM