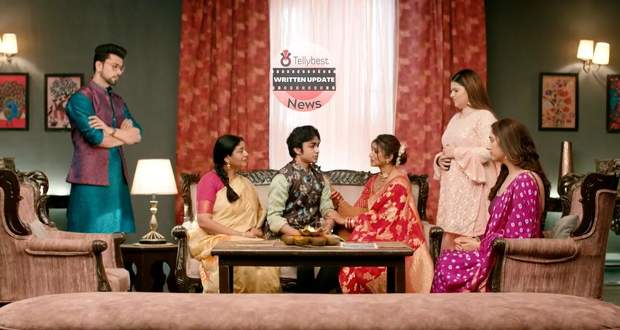 Today's Bade Ache Lagte Hain 2 2nd September 2022 episode starts with Ram throwing money at Priya and asking her to get lost as the drama is over.

Priya remains thunderstruck on seeing Ram’s 180-degree personality turn and asks him why he is acting in that way.

A girl comes from the crowd and clings to Ram asking him to spend time with her privately in his room.

Seeing Ram touching the other girl, Priya’s heart stings, but she remains standing, unable to say anything.

However, before Ram enters his room where the girl is waiting for him, Priya stops Ram and asks him why he is acting differently.

Ram says that it is Priya who has made a joke out of him and reminds her that the thing between them was just merely an act.

Priya replies that she knows that the whole thing was not an act for either of them, especially regarding Pihu.

Hearing Pihu’s name, Ram gets reminded about Priya’s betrayal again and asks Priya why she is talking to him about Pihu.

Ram asks Priya what he is to Pihu if Krish is her father and why Ram should care about Pihu when she is no one to him.

Remembering Ram’s proposal, Priya asks Ram if his words were also fake at that time to which Ram replies that his proposal does not mean anything.

Ram walks into his room and shuts the door on the face of Priya, leaving her to cry alone.

After sitting beside a sleeping Pihu in a dark room, Priya starts to bawl her eyes out as she genuinely wanted to reveal everything to Ram about Pihu being his daughter.

Priya questions herself about what changed Ram in one night and how he can break their dreams after showing her and Pihu a ray of hope.

Elsewhere, Ram asks the girl to go back home and suggests she fall in love with someone who can revert those feelings.

Ram gets determined to fight for himself and his daughter and show Priya what she has done by separating a loving father from his daughter.

Meanwhile, Brinda, Aditya, and Vikrant decide to reveal the duplicate DNA reports they collect from the doctor to Ram.

Before they can tell Ram the truth, Nandini comes crying and wraps Ram in a hug saying that they have found a ray of light in their lives.

Nandini tells Ram that Pihu is his daughter and a part of the Kapoor family.

Shubham hands over Ram the DNA reports and says that the reports prove that Pihu is Ram’s daughter.

© Copyright tellybest.com, 2020, 2021. All Rights Reserved. Unauthorized use and/or duplication of any material from tellybest.com without written permission is strictly prohibited.
Cached Saved on: Saturday 1st of October 2022 11:55:01 PM