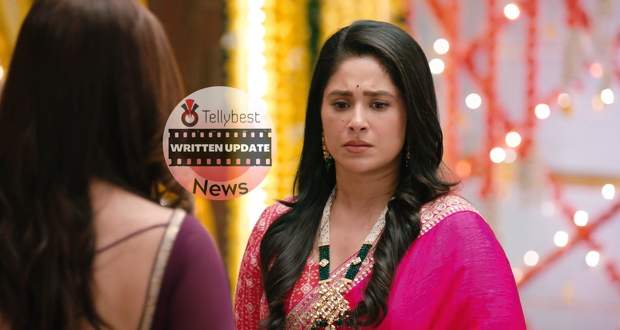 Today's Bade Ache Lagte Hain 2 30th August 2022 episode starts with Ram and Krish confronting each other in the competition for which they will get to go on an adventure with Pihu.

Pihu explains the rules of the game where both Ram and Krish have to search for Priya with their eyes closed.

After they find Priya, she will give them a clue for the next round where Ram and Krish have to complete a task and break the hanging pot of butter.

Ram and Krish gear up with full determination to win the game and begin to search for Priya with their eyes covered.

Sensing Priya’s touch, Ram becomes the one to find her first and secures the clue for the next task.

Priya says sorry to Krish as he gets left behind in the game and hands him the clue that will help him in the next round.

Krish reaches the spot of the next round where Ram has already started to eat butter from the pots placed by his side.

Meera tells Krish that one of the pots has a clue for their next task and he has to eat the butter to make the pot empty.

Priya remembers that Krish does not eat butter and reminds the same to Pihu who feels bad about not keeping that in mind.

Despite having problems with butter, Krish tries to eat it as he wants to spend some time with Pihu for the last time.

Pihu says that she wants both Ram and Krish to win as she loves them both and cannot disregard Krish as he has always taken care of her.

Hearing that, Ram stops his actions and thinks about his blind selfishness throughout the game.

Krish finds the pebble with which he hits the hanging pot and wins the competition by breaking it.

Surprisingly, Ram also feels happy seeing Krish win as he has the right to be happy with Pihu as her father.

Later, Krish comes to talk with Ram and asks him why he intentionally lost the game.

Ram says that it is not sympathy or pity that led him to do that but his duty as a human to let Krish have his moment with his daughter.

As Krish reminds Ram about his family hating Priya, Ram replies that he will take care of Priya and Pihu with his life.

Krish promises Ram that he will not come in between them and shares a hug with Ram.

On the other hand, Vedika tells Priya that her plan has changed from sending Ishaan to jail to framing Priya for everything in front of Pihu.

Ishaan hears the conversation between Priya and Vedika and decides to leave everyone by leaving a letter behind.

After Sarah reads the letter, everyone begins their search for Ishaan.