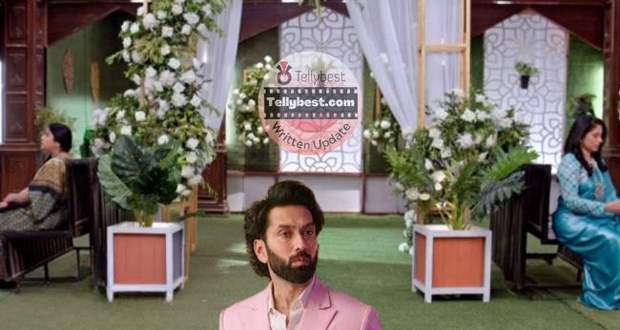 Pihu stares at him in disbelief while Priya and Sarah secretly try to study Pihu's expressions.

Raising his voice, Vicky dismisses Meera Ma while she pretends to be hurt by his words.

Meanwhile, Brinda calls Ram outside the room and asks him where he is.

Ram tells her that he is going to Yash Khanna's house to finalize the deal that couldn't happen due to today's mishap.

Bri questions Ram if Sid & Shubham's deal is more important than Pihu while Ram is under the impression that Sid truly loves Avni (Yash Khanna's daughter) and he doesn't want to let his love die down.

Bri internally asks God when is Ram going to stop living for others and cuts the call.

On his way, an old man bumps into Ram's car and makes him scared.

Ram asks him if he is hurt, but a younger chap comes towards the old man's way and threatens to kill him.

Ram intervenes and says all this gangster behavior is not going to work on the road while the young chap, Lakhan, (Ram's younger brother) retorts, saying the road is not owned by his father.

Lakhan glares at Ram before releasing the old man's collar, forcing Ram to think about his upbringing.

At Kapoor Mansion, Pihu finally asks Vikrant to stop saying all the nonsense and says if he is not ashamed to talk like this to Meera Ma who is so much older than him.

Pihu asks Sarah and Priya if they even love their mother or not and she herself asks Meera not to cry.

Priya seizes the moment and tells Pihu that Vicky is doing the same thing she did with Nandini.

Pihu finally utters that she knows what she did with Nandini was wrong but she lets Priya know she doesn't like Nandini one bit.

However, Priya reminds Pihu that the way we treat others is a reflection of our own nature.

Meanwhile, Ram talks with Yash Khanna, and Swati cries to herself, thinking both her sons are under the same roof but oblivious to reality.

Meanwhile, Lakhan warmly greets Swati and says he has finally cracked a deal after which he will be rich.

He shocks Swati by saying that Avni and he love each other and he wants to ask for marriage permission from Yash.

However, Swati warns him not to do it since Yash Ji is their boss, and they are merely his servants.

Lakhan doesn't care and stands behind the hall where Ram and Yash Khanna are talking.

Ram gets a call from Priya & he excuses herself, paving way for Lakhan to get Yash's signs on the papers.

Yash tells him he is busy while Pihu is on the call with Ram and asks him to come back home since she has to say sorry to Nandini.

After Lakhan leaves, Ram takes leave from Yash & asks him to let him know Avni's decision.

Both Ram and Pihu go to Nandini to apologize but Nandini still tries to guilt-trip Ram and leaves hurriedly.

Priya gets angry at Nandini for still trying to make Ram feel bad.

While Ram tells Pihu that she did the right thing by apologizing from her heart, Priya wishes Ram was able to receive real, motherly love from his biological mother.

© Copyright tellybest.com, 2022, 2023. All Rights Reserved. Unauthorized use and/or duplication of any material from tellybest.com without written permission is strictly prohibited.
Cached Saved on: Wednesday 25th of January 2023 11:55:01 AMCached Disp on: Thursday 9th of February 2023 04:29:04 AM