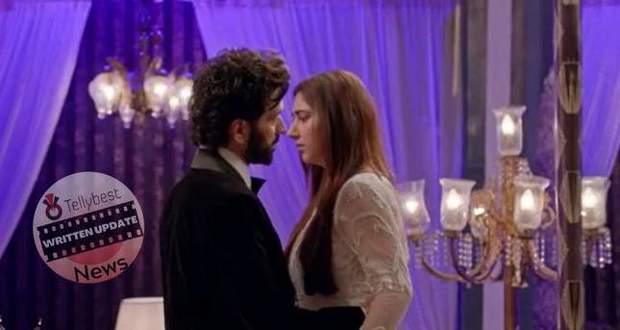 Priya looks at herself in the mirror, feeling shy after this sudden encounter.

At Sood House, Sarah asks Adi and Vikrant what is happening at Kapoor House as Sandi tells them that Dussehra and RaYa's marriage anniversary is falling on the same day.

On the other hand, Ram opens the champagne bottle with Pihu uttering a wow and drops his phone on the floor.

However, he says wow not for the champagne bottle but at Priya who appears in front of him, looking very pretty in her white embellished gown.

Priya goes to pick up the phone but suddenly the sirens of the showroom echo and both Ram and Priya get stuck under a golden circular cage.

Priya complains to Ram, saying it is his fault that they are both trapped.

Ram says he can't fight with Priya right now as he feels suffocated under a trapped environment while Priya scolds the staff for listening to their banter, rather than helping them.

Smiling, Pihu gives white flowers to Priya, announcing that Ram and Priya look like a hero and heroine of a film and they should kiss.

Priya gets shocked while Ram sheepishly says that Pihu wanted to see a movie.

Pihu commands both of them to pose for a photo while Ram nervously gives flowers to a hesitant-looking Priya.

Both of them look lovingly into each other's eyes while Pihu says she is going to send this photo to judge aunty.

The staff compliments RaYa for looking great together "bade acche lagte hai" but Priya only gets angry at them.

Ram calms down Priya, and orders Pihu to get a glass of water for her mother so she can chill.

Suddenly, Ram gets a call from Vedika who informs Ram that Adi hasn't gone to the Shah Enterprise meeting.

Pihu allows Ram to go but tells him not to be late for the party.

Later, Nandini shows Pihu the party arrangement, and Sandy, Sarah, and Meera join them as well.

Meanwhile, Ram gets anxious as it will take him half an hour to get home but asks Vedika for a shortcut because he wants to surprise Pihu like he used to surprise Priya.

Ram smiles to himself, and runs his hand through his hair, remembering how Priya used to call him 'her' hero.

However, the way Vedika shows is a longer route.

Pihu then sends Ram a photo of her posing with Ram that makes him laugh in the car.

However, Pihu gets sad when Ram doesn't show up on time along with Priya.