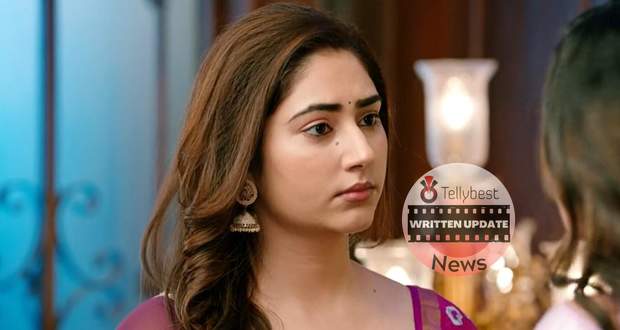 Today's Bade Ache Lagte Hain 2 31st August 2022 episode starts with Priya going out by herself to search for Ishaan after Sarah lets her know about Ishaan’s letter.

Krish proposes to go with Priya but Priya asks him to stay with Sarah as she has to handle Ishaan by herself.

Meanwhile, Ram plans to meet Priya at the Terrance after some time and feels happy as he imagines Priya accepting his proposal of coming back into his life.

Pihu comes to Ram and asks him why he is not spending time with her knowing that she and Priya are going to leave in some time.

Calling Pihu by his side, Ram says to her that he has to tell her something but will do it after Priya comes.

Ram asks Pihu to sleep for a bit as she looks tired and pats her while she falls asleep beside her.

Just then, Vedika informs Ram that Ishaan has gone missing, which surprises Ram, and he leaves the room to check what is going on.

After getting informed about Ishaan by Sarah and others, Ram also leaves with his car assuring that he will not let Ishaan get hurt.

In the meantime, Brinda reaches the clinic where she gave the samples for the DNA test and asks the doctor for the result.

The doctor informs that a man came and took the reports with him by saying that Brinda has sent him.

Brinda understands that Aditya is the one who took the reports but gets happy after hearing that the samples have matched.

On the other hand, Priya catches up with Ishaan and asks him to stop in his tracks while he reaches close to the police station.

On asking Ishaan, he says that Priya and Pihu will be able to live happily with Ram if he confesses everything to the police.

A flashback shows Vedika asking Ishaan to confess everything if he wants her to leave Priya and Pihu alone.

Ishaan says that Pihu deserves to live happily with her father, that is Ram, and Ram overhears that from a distance.

Knowing that Priya is going to accept Ram’s offer about returning to his life, Ishaan says that he cannot become the reason for their separation.

Priya tells Ishaan that she has no intention of telling Ram that Pihu is his daughter and living with him as a family.

Ram stands shocked as he hears Priya saying that she will never come together with Ram again as everyone in his family considers her a murderer.

Priya makes Ishaan believe that she has no intention to live with Ram and only did the act to reduce her guilt due to Shivina.

After hearing the truth, Ram reaches home with a shattered heart and falls on his knees as he sees Pihu standing in front of him.