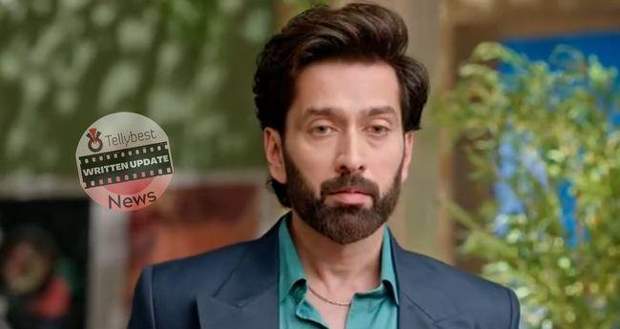 However, Nandini instantly says that they are not murderers but Shubham says they just have to create fear in Priya's heart that something or someone will hurt Ram.

On the other hand, Ram thinks about not being able to share his vision for the whole family with Nandini since she wants a division in the property.

Just then, the lights go off and Pihu enters his room, asking him to participate in an adventure directed by Priya.

Priya enters as Tarun, in a long pencil skirt and satin top.

Ram cocks his head side to side, mesmerized by Priya who asks Pihu who is playing Ram's character whether she is ready for her bachelor party or not.

Ram laughs when Pihu asks whether grape juice will be available or not.

Later, Pihu showcases both of them Mata ki Chunari as Mata Rani granted her wish to be a happy family.

She then asks Ram to sing a song and he sings "Bade Acche Lagte Hai" lovingly to Pihu while Priya sits beside her on the sofa.

Suddenly, rain starts pouring down and Ram swings Pihu in his arms and play-fights with her as they watch the rain droplets ricochet from the balcony.

Pihu falls tired and sleeps on the bed while Priya and Ram have a moment to themselves.

He thanks Priya for coming and lighting up his mood when suddenly, she takes a swab of ice cream kept in front of her and applies it on his cheek as "Haldi".

Ram gets surprised at Priya's playful nature and rubs his cheek against hers, whispering it's her Haldi too.

Ram nudges his nose against hers as they come close and Priya's breath starts to rasp when suddenly Ram says wanting to lock this moment forever.

However, Priya gets possessive and tells him only she can get locked in his heart, not even one moment.

The next day, Ram asks Tarun to call Nandini and Shubham for breakfast but Tarun informs that both of them have gone to the farmhouse.

Aditya & Brinda come to meet Ram and asks him to be happy as it is his marriage day.

Meanwhile, at Sood House, Priya teasingly asks Sandy to buy her a lehenga while Ishaan and Pihu go to buy their new clothes.

Krish comes to meet Sandy but Priya asks him in private whether he was able to find out the reason behind the Dollhouse blast.

Krish says that there were firecrackers fit inside it but asks Priya to focus on her wedding.

He also requests Priya to tell Ram how she feels about him transparently since he and Priya never had a chance.

© Copyright tellybest.com, 2022, 2023. All Rights Reserved. Unauthorized use and/or duplication of any material from tellybest.com without written permission is strictly prohibited.
Cached Saved on: Monday 21st of November 2022 05:05:57 AMCached Disp on: Saturday 10th of December 2022 02:19:24 PM