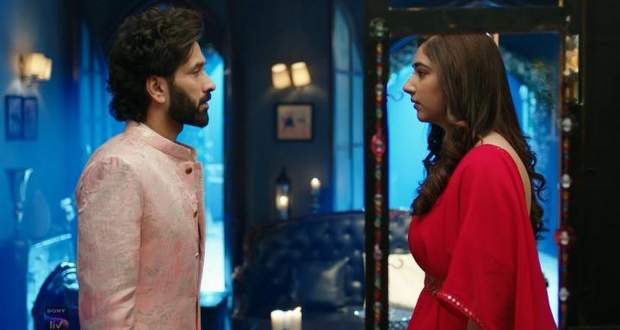 Today's Bade Ache Lagte Hain 2 3rd August 2022 episode starts with Priya eavesdropping on Nandini in her room and hearing her get furious regarding Shivina’s death.

Hearing Nandini, Priya’s suspicion gets confirmed that Nandini is the one who is threatening her as she did in the past.

Meanwhile, Meera talks to Krish about him going to Dombivelli to get Priya’s dream dress but Krish replies that the last piece was already taken away by Ram.

Ram comes and tells Krish that he was slow in reaching the store which creates tension between them.

Krish asks Ram why he went to such lengths for someone he hates so much, making Ram go silent.

While both Ram and Krish try to taunt each other for not being Priya’s husband, Priya comes and tells Krish that she wants to talk to him alone.

Priya tells Krish that Nandini is the one behind the blackmail scheme and she is sure this time.

Sandy comes and informs Ram that the arrangements for Priya’s surprise birthday party are complete to which Ram reacts in a cold manner.

However, as the ministers ask Ram when the birthday party is going to be held, Ram goes off to look after the arrangements.

On reaching the decorated spot, Ram tells Brinda that he wants everything to be over as soon as possible and does not care whatever Priya and Pihu think about him.

Pihu overhears this and tells Ram that she will never forgive him for treating her and Priya like that.

Trying to convince Pihu, Ram kneels down in front of her and asks for Pihu’s forgiveness by requesting her.

Nandini decides to ruin the planned thing and fakes getting unconscious which worries Ram gravely.

After the doctor comes, he suggests Nandini take an injection but Nandini somehow refuses as she cannot take in the real medicine.

Ram asks Sandy to cancel the birthday party as Nandini’s health condition is not good and takes her back to her room.

Krish proposes to Priya that he, Priya, and Pihu should go out and celebrate as Pihu will get upset after the cancellation.

Elsewhere, Nandini tells Shubham that she is preventing Ram and Priya from coming close to each other so that Pihu’s truth does not get revealed.

© Copyright tellybest.com, 2022, 2023. All Rights Reserved. Unauthorized use and/or duplication of any material from tellybest.com without written permission is strictly prohibited.
Cached Saved on: Monday 21st of November 2022 03:35:21 AMCached Disp on: Friday 2nd of December 2022 04:17:29 PM