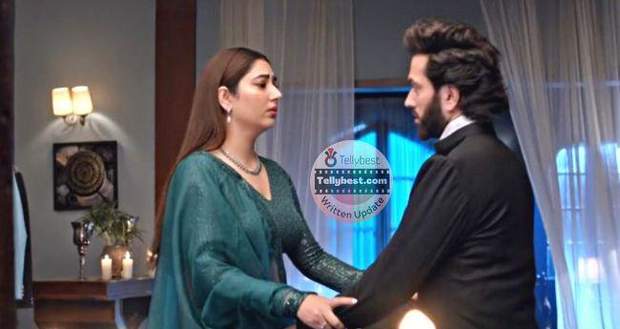 Lakhan then hands over his contract to Yash to approve it.

Yash views the project and asks if he could invest in his project while Lakhan happily agrees to his proposal.

As soon as Yash and Avni leave for the sangeet ceremony, Swati asks Lakhan to leave with her immediately.

Meanwhile, at the ceremony, Shubham tells Ram that Nandini has left a letter and has left the house.

Ram reads the letter and finds out that Nandini has left so that they can get married in peace without any drama and she will return after the wedding.

Ram asks Shubham to call Nandini and call her back.

Shubham says that it is for the best that Nandini has left.

Sid arrives and informs Ram that Yash and his family are on their way to the ceremony.

Ram replies that if Avni gives her consent for marriage then they will announce it officially in the sangeet function.

Meanwhile, Lakhan asks Swati why she is asking to leave so suddenly.

Swati tells him that his distant relative in their village is very sick, and they have to go help her.

Swati asks Lakhan to go and book the tickets while she is packing but Lakhan finds out that Swati is lying, and he asks the reason why she is lying. Swati is compromised and can't tell him the reason.

Then it was time for group time, everyone gradually joined in.

Ram excuses himself from the dance and greets Yash.

He asks Yash if Avni has said yes to the proposal to which Yash replies that Avni is happy with the marriage and has said yes.

Ram happily breaks the news of Avni's and Sid's wedding to Priya.

Priya says that as long as the reason for marriage is love then there is no problem.

Meanwhile, Lakhan asks Swati to swear on him and tell him the truth.

Swati tells Lakhan that no matter how successful Lakhan gets, Avni will not choose him over her father and her father has already found a match for Avni which leaves Lakhan heartbroken.

Back at the ceremony, Ram offers Priya a drink, but Priya reminds him that she's pregnant.

Ram then gathers everyone's attention and announces that he's going to marry Priya after 2 days again and will be together forever and he has to thank Pihu for bringing the two of them together.

Ram then moves towards Yash and says that he's very happy to change their professional relationship into a personal one.

Priya thinks to herself that Avni's expression at the announcement was of surprise. She wonders if Avni knew about the proposal or not.

Ram asks Avni if they should seal their wedding bond at which Lakhan comes and interject.

He says that he will not let this marriage take place.

Ram asks Lakhan who he is and how dare he create a scene at his house.