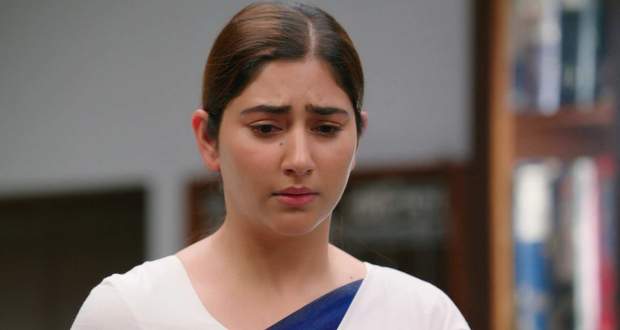 Today's Bade Ache Lagte Hain 2 3rd June 2022 episode starts with Priya asking for an apology from Brinda but Brinda refuses to do so.

Brinda blames Priya for betraying Ram and says that Ram will never be the same as he was after this incident.

As Priya requests Brinda to make her talk to Ram once, Brinda leaves after refusing Priya.

Shashi tells Ram that he was unaware of the fact that Mahendra Sood was a criminal involved in the case.

Further, he reveals that he has handed over all the evidence to the police after discovering the truth.

Ram remains silent and Shashi understands that Ram will not forgive him for his past mistakes.

Later, Nandini informs Ram that Priya is pregnant and asks him to bring her back to the house.

Ram gets shocked on hearing the news and gets overwhelmed with the happiness of becoming a father.

However, Ram hesitates a bit on the subject of releasing Priya as she is the culprit of Shivina’s death.

At Nandini’s request, Ram goes to the police station and appears in front of Priya to take her back.

Ram asks Priya to forget the past misunderstandings and come with him as he will not let his child suffer like that anymore.

However, Priya asks Ram to worry about himself and reveals that he is not the father of her child.

Priya says that Krish is her first love and the father of her child.

Hearing Priya’s words, Ram freezes in his spot and refuses to believe the revelation.

Priya asks Ram to make sure he knows that she cheated on him with Krish and their relationship is over now with Shivina’s death.

Ram refuses to believe Priya’s words and tells her that he will run a paternity test.

Just then, Nandini comes there and takes away Ram by telling him that she will not let Priya out after hearing the truth.

Ram leaves with tears in his eyes unable to believe in Priya’s lies and betrayal.

The flashback starts when Nandini comes to visit Priya and asks her to tell Ram that her child belongs to Krish.

© Copyright tellybest.com, 2020, 2021. All Rights Reserved. Unauthorized use and/or duplication of any material from tellybest.com without written permission is strictly prohibited.
Cached Saved on: Wednesday 3rd of August 2022 01:27:14 PMCached Disp on: Tuesday 16th of August 2022 03:06:00 AM