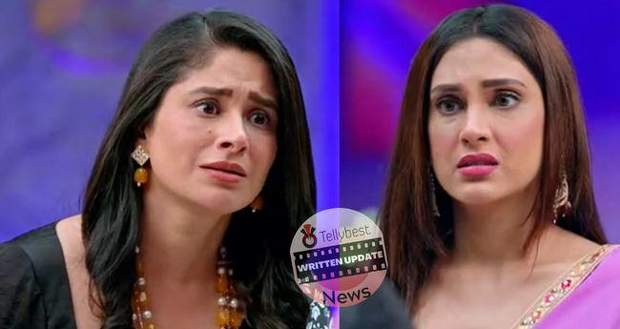 Today's Bade Ache Lagte Hain 2 3rd November 2022 episode starts with Nandini telling Ram that she wants to redeem herself for her previous actions and gets ready to go to the farmhouse with him & Krish.

Priya challenges Vedika that she is starting to become a criminal like Sashi, pushing her into a mental dilemma.

At Sood House, Meera feels grateful once Vikrant tells her that Priya & Pihu have been found.

On the other hand, Ram, Krish, & Nandini reach the farmhouse and confronts Vedika.

Ram informs her that her property shares will be transferred anew while Vedika says only once she gets them, she will let Ram meet Priya & Pihu.

Nandini does her drama and asks Vedika how low she can bend for money.

Just then, Shubham calls out Ram's name and comes with the police.

Vedika gets angry and picks a flower vase to hurl at Ram for calling the cops.

However, Priya grasps Vedika's hand after Krish releases her and Pihu from the other room.

In a jiffy, Priya slaps Vedika twice while Ram asks the cops to arrest Vedika for kidnapping his wife & his daughter.

Pihu hugs Ram while Vedika gets arrested and asks Ram to hear the whole picture.

Nandini breathes a sigh of relief once Vedika is gone.

However, Priya gets hysterical and tells Ram that not only Vedika but Nandini & Shubham were involved in their kidnapping too.

Priya spits out facts, stating it doesn't matter whether she dies or Pihu dies.

Priya reveals that Nandini made fake ownership papers but Ram doesn't believe her.

He instead tries to calm a crying Priya down while Krish asks Nandini whether he can check her phone or not.

Nandini nervously says that she did get Vedika's call while Priya shouts at her to stop her drama.

Priya screams and says Nandini was never depressed and whatever front she has put in front of Ram was all fake till now.

Stating that Vedika was just a sidekick, Priya says Nandini knew about the fake chits and also told Pihu about her going to jail.

Pihu hugs Ram while he asks Priya to come to his car outside.

Once Ram leaves, Pihu tells him that she wants a happy family.

Inside the farmhouse, Nandini makes fun of Priya's crying face, making her listen to the recording when Ram came and hugged her knees to stay intact as a family.

Shubham taunts Priya too, asking her to be in her lane and let Ram believe their fake love.

At Sood House, Meera prays that RaYa doesn't get separated this time because they have Pihu as their glue now.

© Copyright tellybest.com, 2022, 2023. All Rights Reserved. Unauthorized use and/or duplication of any material from tellybest.com without written permission is strictly prohibited.
Cached Saved on: Monday 21st of November 2022 01:22:16 AMCached Disp on: Thursday 1st of December 2022 12:45:26 PM