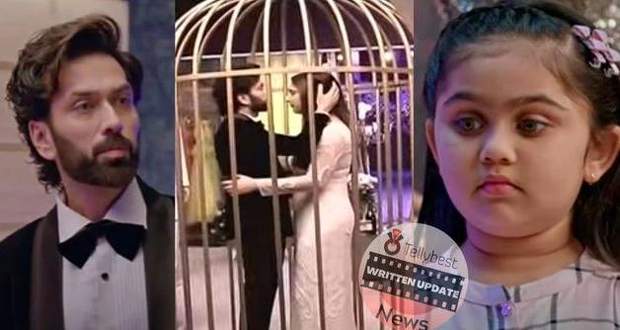 Today's Bade Ache Lagte Hain 2 3rd October 2022 episode starts with Ram getting mad over the driver as he doesn't want to be late for Pihu.

Vedika lies to Ram, saying she thought this was the shortest route.

Just then, Ram gets a text from Priya stating that she has handled Pihu for now but Ram must come within one hour.

However, Priya suspects Nandini of liking Pihu in reality or not.

All of them start making Rangoli as Meera narrates the story behind Dussehra, of good triumphing over evil.

Priya inwardly says when will this happen at Kapoor Mansion as she gazes at Nandini.

Pihu then asks Meera to narrate the story of Lord Ram and Hanuman Ji and says she wants a best friend like Hanuman Ji.

Just then, Priya receives Ram's text stating it is impossible to reach in an hour since he is stuck in traffic.

At the same time, Vedika messages Nandini stating that Ram's promise to Pihu will definitely break because by the time they will reach, it will be too late to mend Pihu's tender heart.

Out of the blue, Nandini asks Priya to sing and Priya sings the song "Ghar More Pardesiya" for Pihu and dances along with Sarah.

Both the sisters dance beautifully, joined by Sandy.

Suddenly, Priya bumps into Ram, getting shocked but it is just a beautiful daydream.

Nandini dances with Pihu as well and lifts Pihu in her arms.

Priya looks at the entrance to see if Ram has arrived or not and he does, much to Nandini's shock.

Ram opens his arms for Pihu and strokes her hair while she hugs him tightly.

However, Vedika & Nandini's face falls in disappointment to watch Ram arrive on time.

Brinda then reveals Adi & Vikrant helped Ram come on time through a private airplane through one of Vedika's trusted friends.

Ram then lights Raavan up while Sandy cheers for Lord Ram & Goddess Sita.

Pihu stops a walking Ram and wishes him a happy anniversary.

However, Priya tells Pihu they are not together but a stubborn Pihu says if they didn't love each other, Pihu wouldn't be here.

Pihu then asks RaYa to hold hands together and cut their anniversary cake.

Everyone claps happily except Nandini, Shubham, and Vedika.

Pihu asks Ram to feed her the cake while Priya inwardly says if Ram and she can't be together, she will never give up on Ram and Pihu's bond.

At night, Pihu reveals to Priya that since she is too happy, she is not able to sleep.

Sarah & Sandy eavesdrop on Priya and Pihu where Priya says sometimes adults cannot do things they wish the most for.

Meanwhile, Brinda tells Ram that they didn't lie for Pihu while Ram reveals he got to know about Pihu from Eshan, not Nandini first.

© Copyright tellybest.com, 2022, 2023. All Rights Reserved. Unauthorized use and/or duplication of any material from tellybest.com without written permission is strictly prohibited.
Cached Saved on: Monday 21st of November 2022 08:08:30 AMCached Disp on: Tuesday 6th of December 2022 01:04:29 PM