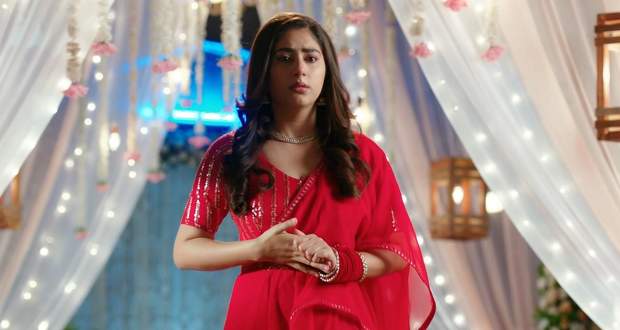 Today's Bade Ache Lagte Hain 2 4th August 2022 episode starts with Priya deciding to go out with Krish to celebrate her birthday so that Pihu does not remain upset anymore.

Suddenly Pihu comes and tells Priya that she does not wish to stay there anymore.

Pihu denies giving the interview and says that Ram is not good at all as he forgot about Priya’s birthday totally.

As Priya tries to explain to Pihu, Pihu runs away with Priya following her to stop her.

However, as Priya reaches the surprise venue, she spots Pihu standing there with her birthday.

Pihu screams with happiness and wishes a happy birthday to Priya surprising Priya.

After Priya asks Pihu who her helper was, Pihu points to a certain person behind Priya who turns out to be Ram.

Priya thinks that the media or ministers are back but Ram says that he wanted to surprise Priya because it is her birthday.

Ram switches on the music and asks Pihu to dance and watches Priya smiling while seeing him dance with Pihu.

Observing how Ram is lost in Priya’s eyes, Pihu understands the situation and wakes Ram up from his imagination.

Suddenly, Pihu remembers that Krish is waiting for her and Priya and decides to inform him that Priya is happy with her prince charming.

As Pihu leaves, Ram and Priya blatantly stare at each other and imagine dancing to a romantic song with each other.

Ram asks Priya why she has not married Krish and joined her name with him even after 5 years when she is in love with him.

Hearing that, Priya tries to walk away but Ram stops her from doing so.

Just then, Tarun comes and informs Ram and Priya that Pihu has swallowed Nandini’s medicines which terrifies them.

Ram and Priya run to Pihu and decide to take her to the hospital as Nandini’s medicines are high doses of anti-anxiety pills.

However, Pihu says that the medicines are the same as those she takes given by Priya.

Meanwhile, Nandini finds Priya’s phone and reads the messages sent by Vedika saying that Ishaan was the one who pushed Shivina.

© Copyright tellybest.com, 2022, 2023. All Rights Reserved. Unauthorized use and/or duplication of any material from tellybest.com without written permission is strictly prohibited.
Cached Saved on: Wednesday 25th of January 2023 11:07:11 AMCached Disp on: Thursday 9th of February 2023 08:53:27 AM