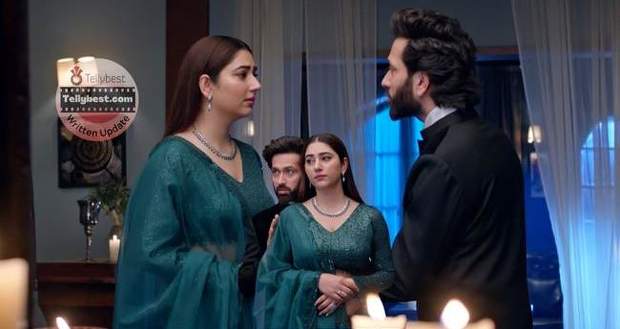 Lakhan says to Ram that he's trying to use his power and wealth to take a person's freedom.

Ram gets infuriated and says that a goon like Lakhan has a habit of creating scenes at a decent household.

Lakhan replies that privileged people like Ram have a habit of looking down on others.

Ram agrees that he judges people, just like he is judging Lakhan right now and his estimation is correct.

Priya asks Sara to take Pihu into the room and asks Ram to calm down.

Lakhan asks Priya to reason with everyone because she seems to be the most intellectual one.

Ram is enraged and warns Lakhan to talk to him and not his wife.

Lakhan tells Ram that he is in love with Avni and all of them are trying to take her away from him forcefully, but he will not let it happen.

Lakhan moves towards Avni and asks her to tell everyone the truth, but Ram holds Lakhan by his collar and asks him to stop.

Lakhan clenches his fist and aims at Ram.

Swati is watching the scene from a distance and praying constantly that both his sons don't do something that will create a wall of resentment between them for the rest of their lives.

Ram challenges Lakhan to hit him but Priya intervenes and insists Ram to calm down and give Avni a chance to tell everyone the truth.

Avni breaks her silence and says that Lakhan works for Yash and his mother works as a maid in their house.

Lakhan asks Avni politely to tell everyone the truth but not bring Swati into the conversation.

Avni remains quiet but Lakhan keeps on insisting that she tells everyone the truth and also asks her not to be scared of anyone as he will always protect her. He asks her to tell the truth to everyone for his sake and then holds her hand.

Avni withdraws her hand and yells at Lakhan to stop.

Avni tells everyone that she doesn't love him and this whole thing is one-sided, and he is making up stories.

Ram says that he knew Lakhan is bluffing and asks him to leave.

Lakhan keeps insisting Avni drop the act and admit the truth and he knows that she is under pressure.

Ram asks Lakhan to leave and tells him that since he respects the fact that he has a mother, he is not letting the guards throw him out of the house or the police arrest him.

Ram asks Yash why he hadn't said anything when Lakhan was creating a scene.

Yash replies that he was in shock and because of that he couldn't say anything.

Avni leaves the crowd and Priya thinks to herself that something is off.

Avni finds an empty spot and sits there, she cries her heart out while Swati listens to her and goes to her.

Seeing Swati, Avni breaks down and hugs her while apologizing constantly, Swati tries to calm her down.

Meanwhile, Pavan tells Priya that he saw Avni going outside the house.

Priya couldn't see Swati but had a feeling that Avni was talking to her.

Priya tells Avni to tell her the truth because she will help her no matter what.

But before Avni could say anything, Yash arrives and apologizes to Priya.

Veena says that she wants to talk to Avni alone.

After a while, Ram tells Priya that he has met Lakhan earlier and he is a man without morals.

Meanwhile, Lakhan complains to Swati that Ram is a blind-sighted privileged rich man who looks down on others and likes to undermine underprivileged people.