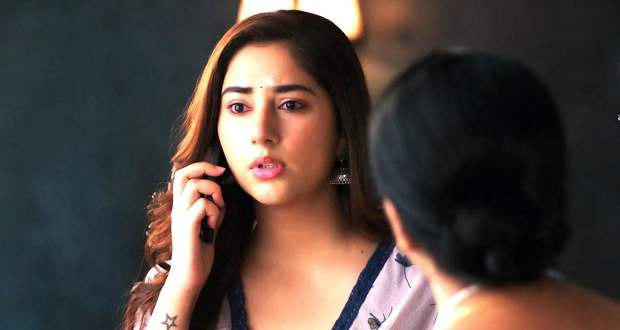 Today's Bade Ache Lagte Hain 2 4th July 2022 episode starts with Vedika declaring to the minister that she and Ram are not going to marry each other as decided.

Vedika tells the minister that Ram has decided to get back together with Priya because of their child.

Ram challenges the minister that he will clear up his image as the perfect family man who has forgiven his wife despite her going to jail.

After the minister leaves, Ram thanks Vedika for supporting his proposal and saying those things.

Vedika says that she is delighted to be of help to Ram and leaves after bidding farewell.

Aditya and Vikrant get happy on seeing Ram choosing Priya over Vedika and praise him for taking up the correct option.

However, Ram expresses his concern regarding Priya agreeing to help him after all the bitter past between them.

Vikrant asks Ram to talk with Priya and sends him to Krish’s house to initiate the conversation.

Later, Krish rests in the living room when the doorbell rings and he opens it expecting to see Ishaan visit.

However, the person turns out to be Ram who tells Krish that he needs to talk with Priya about something important.

Meanwhile, Sarah, Vikrant, Sandy, Meera, and Aditya gather in Meera’s house to discuss the future plans they have to take on to bring Ram and Priya together.

Vedika Apologizes to Nandini for agreeing to help Ram but also explains about her not having any other suitable action.

Blaming Shubham for convincing Ram to take the help of Priya, Nandini and Vedika both act grumpy toward him.

At the same time, Ram barges inside the house and begins to shout Priya’s name while Krish tries to stop him.

Ram says that he is still obeying the limits of politeness while Krish was the one to have an affair with his wife.

On knocking on Priya’s room, nobody answers which lead to Krish and Ram breaking the door and coming in.

Inside the room, Ram discovers a letter from Priya in which she tells that she is going to a place where no one can find her as she wants to be alone.

Sarah gets informed about Priya leaving and tells everyone about the news.

After Brinda helps Ram to take on the hints and remember a place where Priya can go, Ram remembers the past where Priya said she will escape to Goa if she will want to hide.

In the meantime, Priya and Pihu proceed on their way to Goa with the memories of Ram buried in Priya’s heart.

However, Ram stops the truck and asks Priya not to leave as he wants her help.

Ram exchanges his car with the truck and drives it to a place with Priya and Pihu where he can talk with them.

© Copyright tellybest.com, 2020, 2021. All Rights Reserved. Unauthorized use and/or duplication of any material from tellybest.com without written permission is strictly prohibited.
Cached Saved on: Saturday 1st of October 2022 09:48:14 PMCached Disp on: Wednesday 5th of October 2022 05:13:44 PM