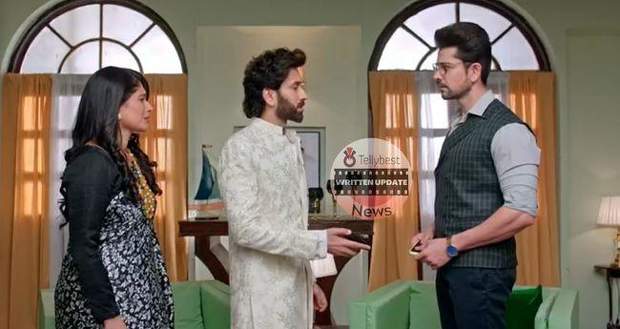 Today's Bade Ache Lagte Hain 2 4th November 2022 episode starts with Nandini telling Priya that she may not have loved Ram but has equally hated Priya.

She threatens Priya by sending her to jail for more than five years this time.

Meanwhile, Pihu tells Ram that she and Priya will always be there now to shower love on him.

Inside, Nandini is still speaking to Priya and gets asked a question why she hasn't loved Ram ever before.

Nandini says that she has loved, and still does but not Ram, but his money.

Ram hears this as he stands with Pihu while Nandini goes on speaking.

Nandini says that Ram must love Priya but he worships Nandini, which is why he hasn't known the truth yet.

Unable to hear anymore, Ram says "Ma" and Nandini gets shocked to see tears in his eyes.

Ram first apologizes to Priya for never believing her and then he tells Nandini that he has only loved her and Shubham.

Crying, Ram states he may be a successful industrialist on the outside but today he stands defeated.

He further wishes that his mother was like Meera because even if she makes mistakes, her love for Priya is pure.

Nandini tries to reason but Ram shuts her up, removes his gold watch, his bracelet, and his wallet, and puts it in her hand.

Ram says if she wanted money, she could have easily asked for it.

When Ram starts to leave, Nandini asks Ram to sympathize with a woman who was left all alone to fill the debts and fend for her two children.

Ram smiles pitifully and reminds Nandini she didn't have two children but three.

Shubham's eyes go red with tears while Priya leads a trembling Ram outside.

Priya asks Krish to take Pihu in his car while Ram puts his head on Priya's shoulders in exhaustion.

Inside the car, Ram tells Priya that he wants to like her.

However, she reminds him that she was full of bitter feelings before she met Ram just because of harboring hatred for Mahendra Sood.

On the other hand, Pihu asks Krish what is the meaning of 'sautela'.

Krish tells her that if love binds everyone then it doesn't matter who is ours by blood and who is not.

He asks her to love everyone regardless of whether she gets it or not like Ram.

Similarly, Priya tells Ram not to feel defeated since he maintained his integrity and honesty in this relationship.

Priya also says she is lucky to receive Ram's love otherwise, she had decided she wouldn't get anyone.

All of a sudden, a boy runs on the road, and Ram steps on the break too fast.

Priya's fingers press the lock and she rolls outside the car, hitting her head against a tree.

Ram crashes his car as his head hits the side window, knocking him unconscious.

© Copyright tellybest.com, 2022, 2023. All Rights Reserved. Unauthorized use and/or duplication of any material from tellybest.com without written permission is strictly prohibited.
Cached Saved on: Monday 21st of November 2022 01:28:48 AMCached Disp on: Thursday 1st of December 2022 12:13:27 PM