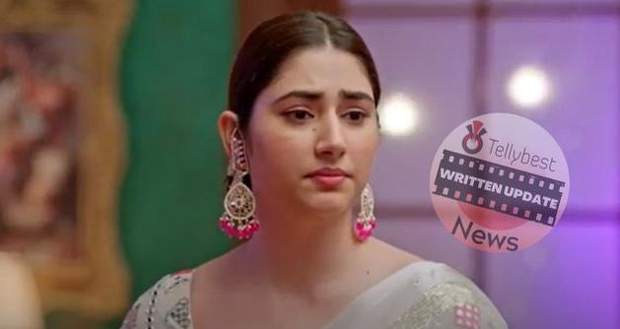 Similarly, Ram reveals to Brinda, Vicky, & Adi that he heard about Pihu being his daughter from Ishaan when he was at the police station.

At Sood house, Sarah asks Priya where she found Eshan when he ran away from home but Priya quickly changes the topic.

At Kapoor Mansion, Ram tries to think of many reasons for Priya & Ishaan's presence at the police station that day and Brinda notice that Ram is sad.

The next morning, Meera showers love on Pihu and Pihu gets a call from her father.

Pihu hands the phone to Priya while Sarah and Sandy hoot playfully.

Ram gets alert & asks Priya what did he do on the call when Priya calls Pihu "badmaash".

Both of them decide to let Pihu study during the afternoon so Ram can play with her in the evening while Pihu realizes that RaYa is not going to let her have fun.

So, Pihu makes a sudden demand for waffles while Sandy loudly says they do not have the waffle maker at home so Ram hears this.

Ram states that Pihu has all the right to throw tantrums being Ram Kapoor's daughter.

Later, Pihu reveals to Meera and Priya that she wants to fly an airplane while Sarah reminds Pihu to study a lot if she wants to be a pilot.

However, Pihu mischievously changes her future profession and states she will spend her time in the kitchen like Meera and Sarah so she doesn't have to study.

However, Priya reminds Pihu that one has to work hard to earn money to live a comfortable life.

Afterward, Ram & Tarun arrive at Priya's house with a waffle maker while Pihu says Tarun should go back to Kapoor Mansion.

She then begs Priya to teach Ram how to make waffles while Sarah goes to chat with Adi & Vikrant.

Sarah gets concerned when Adi talks with SHO as Ram has set up a sudden meeting with him.

In the kitchen, Ram juggles brinjals in his hand and says he is a very good student.

Priya instructs Ram to first take out the flour for the batter but he curses Tarun's name when he is not able to find it.

Priya says Tarun is smart since every household has flour while Ram struggles to lift the container having the flour up.

Ram removes his blazer while Priya ties the apron around him.

Pihu clicks their pictures together while Priya gets shy as Ram looks at her continuously and ties an apron around her as well.

He strokes Priya's hair while Pihu reminds them that if they get too lost in each other, who is going to make tasty waffles for her?

© Copyright tellybest.com, 2022, 2023. All Rights Reserved. Unauthorized use and/or duplication of any material from tellybest.com without written permission is strictly prohibited.
Cached Saved on: Monday 21st of November 2022 07:16:53 AMCached Disp on: Wednesday 7th of December 2022 03:18:04 PM