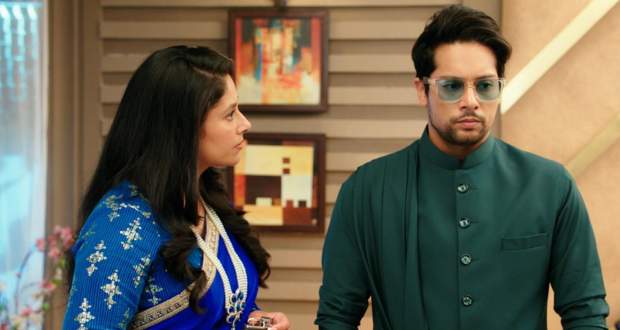 Today's Bade Ache Lagte Hain 2 5th August 2022 episode starts with Ram and Priya taking Pihu to the hospital and making her go through a check-up by the doctor.

Priya panics on thinking that Pihu’s health is in grave danger and begins to tattle her thoughts in an utter hurry with Ram trying to calm her down.

Being in panic, Priya bursts out at Ram but realizes her mistake soon after shouting at him.

Ram understands Priya’s situation and asks her to keep herself collected as she is the only person to whom Pihu can take support for comfort.

The doctor calls Ram and Pihu inside the room and tells them how Pihu is refusing to let them draw blood from her.

Pihu says they are using an injection that hurts and she will never let them succeed in doing so.

Ram supports Pihu in her stand and declares that no one will inject Pihu to draw her blood.

However, Priya says otherwise and orders the doctor to proceed to inject Pihu so that they can check her blood sample.

Ram begins to mock Priya along with Pihu and winks at her indicating that it is his plan so that Pihu’s blood can be drawn out.

As Ram and Priya begin to argue with each other, they hold Pihu’s arms still and the nurse draws Pihu’s blood.

Pihu accuses both Ram and Priya of cheating because they tried to fool her but gets buttered up by Ram as he compliments Pihu about being strong.

Meanwhile, Nandini finds out that Vedika is the one who is messaging Priya and confronts her about the matter.

Vedika tells her about Ishaan confessing the truth in his drunk state and says that she did it because she felt sidelined by Nandini.

Nandini tries to explain to Vedika that the repercussions are gonna be severe if Ram gets to know about her actions and Ishaan’s truth.

However, Vedika replies that Ishaan can go to jail as she does not care what happens to him.

Just then, Shubham calls Nandini and tells her about Pihu’s condition after taking Nandini’s anti-anxiety pills.

Nandini asks Shubham to go and stop the doctor from revealing the truth as Pihu swallowed calcium pills.

Just when Priya was about to hear the report results from the doctor, Shubham interrupts them and sends Priya outside for some excuse.

The doctor tells Ram and others that Pihu is fine because the dosage was low.

Ram decides to take care of Pihu for the next 24 hours and returns home with Pihu and Priya.

Later, it is revealed that Priya is aware of Nandini’s lies and has asked the doctor to keep it a secret.

© Copyright tellybest.com, 2022, 2023. All Rights Reserved. Unauthorized use and/or duplication of any material from tellybest.com without written permission is strictly prohibited.
Cached Saved on: Wednesday 25th of January 2023 03:00:09 PMCached Disp on: Thursday 9th of February 2023 08:26:06 AM