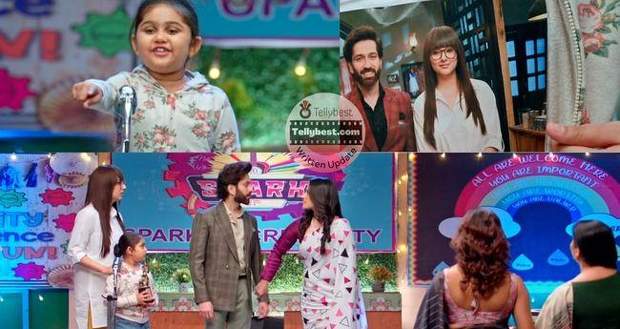 Ram gets awkward while Nandini looks angry. She turns away but Ram stops her.

However, she quickly asks him to go home with her and grabs at his hand.

Just then, Pihu grabs Ram's hand & asks him if he will be coming to thank-you dinner or not.

Later, Priya cries and panics in front of Meera, stating that Nandini Kapoor won't leave her alone now that the truth is out.

Meera sternly asks Priya to be stronger & only worry about Ram and Pihu who are her family.

Priya nods and wipes her tears and Meera reveals that she intentionally introduced Nandini as Ram's mother so she can experience the taste of defeat.

At Kapoor Mansion, Nandini tries to trap Ram again with emotional blackmailing and states that he is doing wrong with Vedika by playing family-family with his PA.

Ram angrily tells Nandini that Vedika & he are just friends.

Nandini then says Ram is changing just because of that new PA and which is why he even stopped caring for Shubhu.

Ram tells Nandini that he is not the one to treat Shubham unfairly but she thinks so because Ram is the step-son while Shubham is her own.

Nandini who was thinking of playing the stepbrother card gets shocked when Ram says it before her.

Vedika follows an angry Ram and says he doesn't love her anymore due to his new PA.

Ram gets confused & tells Vedika that he cannot understand why everyone else is after Lovely.

He then asks Vedika what would make her happy and she asks him to come for dinner at her house.

Later, Lovely calls Ram in the evening and asks him to terminate her since his family is angry at her.

Ram fumbles while Lovely adds that she cannot see Pihu sad since Ram won't be coming.

Ram gets into a dilemma as he also promised Vedika.

Meanwhile, Vedika gets a knock at her door but it is Aditya & Brinda that come in.

They start eating the food prepared by her while Ram goes to Sood House with Priya.

Pihu serves prawns to Ram but Priya says he has an allergy.

Ram asks her how she knew about his allergy and Lovely dumbly says that Sarah has the same allergy and they both look alike.

To divert the attention, Lovely tells Pihu she didn't serve her as Pihu then serves Paneer to Priya.

However, Ram suddenly asks not to do it since Lovely is allergic to Paneer.

Meanwhile, Vedika challenges Brinda and Aditya that they did this on purpose so Ram cannot come to her & the husband-wife seems unfazed as Vedika deserves much worse than this.

At Sood House, Sarah asks Ram how he knew about Lovely's allergy and he says he just remembered it somehow.

© Copyright tellybest.com, 2022, 2023. All Rights Reserved. Unauthorized use and/or duplication of any material from tellybest.com without written permission is strictly prohibited.
Cached Saved on: Wednesday 25th of January 2023 05:24:01 PMCached Disp on: Sunday 5th of February 2023 03:58:38 AM